Police to arrest persons who refuse to vote on December 7 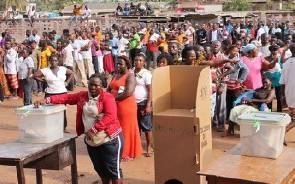 Police Superintendent Isaac Amekudzi of Agona Odobeng in the Asikuma Odobeng Brakwa District of the Central Region has revealed that persons who will refuse to vote in the forthcoming general elections may be arrested.

According to him, it is a constitutional provision enshrined in the country’s law books and that persons who have their names on the electoral register and fail to turn up to cast their ballots on December 7 are flouting the laws..

“Voting is all about democracy and also one’s civic responsibility to vote during election. So on the day of elections if you are seen loitering around and not voting as required, the police may be compelled to enforce the law by arresting you”, he warned.

He added that it will be waste of national resources if persons who are supposed to exercise their franchise as required by law rather resort to drinking and fighting during campaigns and ignore voting during an election day.
 
“All Ghanaians should all vote because of democracy rather than fighting and drinking excessively on the day”, he urged.

Superintendent Isaac Amekudzi therefore appealed to all Ghanaians not to sit in the comfort to drink and do all manner of unnecessary things that will end them in prison but rather go out to vote to determine who rules the country for the next four years.

“On my part, I will also make sure that all the ‘wee’ joints and akpeteshi bars will be shut down during the Election day”, he disclosed.