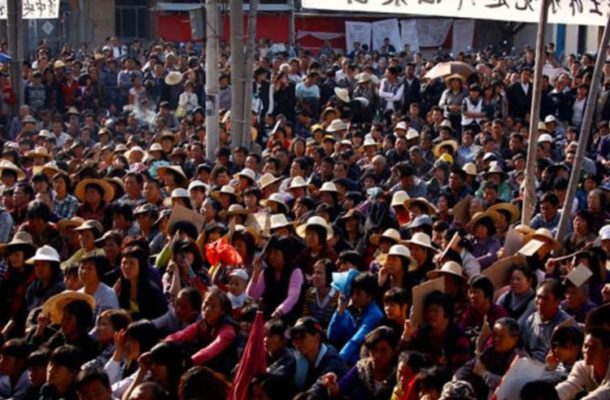 Tear gas and rubber bullets have reportedly been used to put down protests in a southern Chinese village.

The village of Wukan is known for its experiment with democracy.

Images on social media showed a number of people with blood on their arms or chest. The village is now said to be under lockdown, with access to the internet cut off.

Wukan had been allowed to hold local elections after a series of mass protests in 2011 over alleged land seizures and corruption.

A popular former protest leader was voted in as village chief, and had been preparing to lead a new round of action this year, but was instead arrested and accused of taking bribes himself.

Lin's supporters say his arrest was politically motivated, and have been holding rallies in the village over the last 80 days.

CCTV footage recorded at 3.59am shows police forcing their way into an apartment in the darkness, moving from room to room with flashlights, the sound of explosions and shouting from the street outside.

A group of officers grapple with a man on the floor. A woman in a nightdress tries to move towards them, but is dragged back by police.

One photograph shows a man with what appears to be wounds from pellets to his chest and neck, blood dripping down his shirt.

In another, a man in a straw hat holds one hand to his head, a gash on one arm, and a bloodied towel in the other.

The footage cannot be independently verified and access to the village is being tightly controlled.


One person who had been able to speak to relatives inside the village told the Reuters news agency many people were injured and internet connections were down, with police now checking the identities of anyone attempting to enter or leave.

It accused "a small number of lawless persons" of inciting a mob and spreading rumours, and said they had been organising illegal assembles and using threats to force others to join them since the village leader was arrested in June.

Wukan had become known as "democracy village" after the success of its experiment with direct local elections.

That experiment now appears to have come to an end.