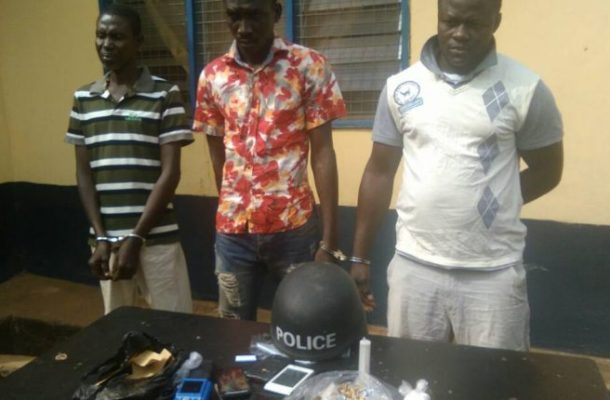 Constable Nana Amoako Donkor, a constable police officer in the Wa Municipality of the Upper west region has been arrested by the regional police command.

The arrest was made by a team of police officers from the Criminal Investigations Department (CID), the Special Weapons and Tactics Unit (SWAT) and the Rapid Deployment Force (RDF) who raided in on them.

Constable Donkor was arrested with five others on Monday, December 11, at about 10:20am, after the police gathered intelligence that someone was selling substance believed to be narcotics in his room at a house in Dobile a suburb of Wa.

According to the Deputy Regional Police Commander, Deputy Commissioner of Police (DCOP), Edward Oduro Kwarteng following the report, a team of police personnel from the region CID, SWAT and the RDF led by Superintendent Daniel Nkaboare and Deputy Superintendent of Police (DSP) Clement Ali respectively proceeded to the house.

Upon reaching there, the team managed to arrest one Hakim Kasim, 28, who was seen wrapping some substance suspected to be narcotic drugs and four others in the house.

Subsequently his room was searched and one police helmet was retrieved.

Mr. Kwarteng said when Kasim was questioned on how he came by the helmet; he mentioned that the stuff he was wrapping was brought to him in the helmet by constable Donkor to sell for him.

He said Kasim then led the police team to the house of constable Donkor, where he was met at home and apprehended.

“When a search was conducted in his room some dried leaves suspected to be Indian hemp and a smoking pipe were retrieved,” he added.

All of them were brought to the police station and upon interrogation, it was realized Suraj Yusif, 45, of age was also an accomplice therefore were detained for further interrogation.

DCOP Kwarteng said in their quest to build a world class police service in the discharge of their core mandate of protecting lives and properties, the service would not be partial in dealing with persons who engaged in criminal activities irrespective of their position or class in society.

He said the service would continue to weed out all the bad nuts giving the service a bad image and nothing would stop the command in build a first class police service for the country.