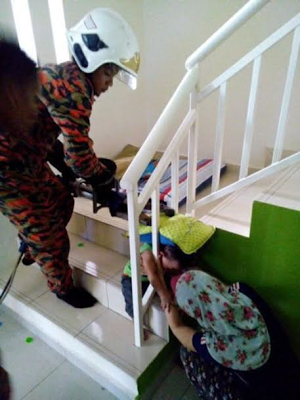 An unnamed one-year-old boy's head was caught between the stair railing at a double-storey home today in Nilai, Malaysia.

The rescuers managed to pull the child out to safety within five minutes of arriving at the scene. Checks showed that the unnamed victim was unhurt.

It was understood that the boy was playing alone in the living room while his mother was busy with the house chores. She realised her son was stuck between the railing after she heard cries coming from the living room.

"When we arrived, the victim was already trapped for about 30 minutes. It took us five-minutes to release him from the stair railing." he said