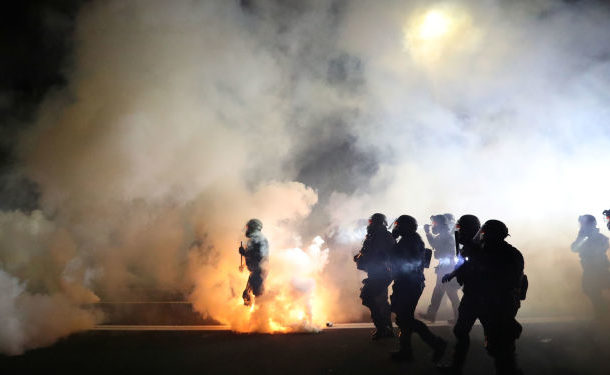 MOSCOW (Sputnik) - Nearly 60 people were arrested in Portland over the weekend amid ongoing protests against racial injustice, according to the Portland Police Bureau.

"There were 59 people arrested during the riot that took place Saturday night and Sunday morning. Forty-three were processed by the Portland Police Bureau", the police said in a Sunday statement.

Earlier on Sunday, Portland police said protesters had thrown firebombs, rocks, and other items at law enforcement officers, prompting them to declare the situation a riot and disperse the crowd.

"Many in the crowd were carrying large shields (photo) and dressed in protective gear including helmets, gas masks, body armor, and all-black clothing. It was clear that the intent of the crowd was not peaceful protest", Portland police said.

One community member was injured as firebombs were being thrown and was later taken to a local hospital, according to police.
Portland police initially said that more than 50 people were arrested during the weekend protests.
Violent protests, attacks on police, court buildings, and federal government facilities have been ongoing in Portland for more than three months, beginning with the 25 May killing of a Minnesota resident, George Floyd, during his arrest in Minneapolis.