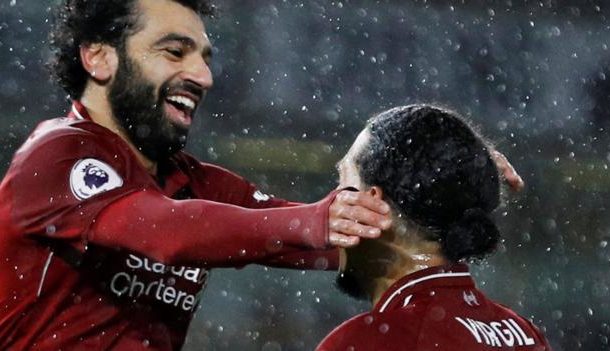 We know who will be top of the Premier League on Christmas Day, but is it all good news for Liverpool?
Saturday brought a rare home defeat for Manchester City, but what does the data tell us about Crystal Palace's "bonanza day"?
And as for Burnley boss Sean Dyche, the weekend saw one unwelcome run continue into a remarkable 61st match.

BBC Sport takes a look at the key stats from the Premier League's latest round of games.
A Red Christmas: reasons to be blue?
Liverpool's 2-0 victory at Wolves on Friday, and Manchester City's surprise 3-2 home defeat by Crystal Palace, leaves Jurgen Klopp's side with a four-point lead at the top before the next round of fixtures on Wednesday, 26 December.
In eight of the past 10 seasons, the leaders on 25 December have gone on to win the Premier League title.
One team provides the two exceptions. Can you guess who?

In the 2008-09 season, Liverpool were one point clear of Chelsea on 25 December, with Manchester United in third, six points behind. They ended up finishing second, losing out to United by four points.
In 2013-14, the Reds were ahead of Arsenal on goal difference but ended up losing out to Manchester City by two points, as a home defeat by Chelsea and a draw at Crystal Palace cost them in the final three games of the season.
The data behind Palace's 'bonanza day'
Roy Hodgson called it "one of those bonanza days". His Crystal Palace side caused a big upset at Etihad Stadium, beating defending champions Manchester City 3-2 on Saturday.
But where does it rank among recent shock results?
Simon Gleave, head of sports analysis at Gracenote, suggests it is the biggest upset since Manchester United lost at home to Blackburn Rovers on New Year's Eve in 2011.
He says: "Odds of a Blackburn win at Old Trafford that day were 25-1 at kick-off. A Palace win at City on Saturday was a 20-1 shot when it started according to some bookmakers.
"There have been 10 Premier League matches since the summer of 2003 in which there has been a winner with odds of 14-1 or more. All were away wins at either Arsenal (four times), Chelsea (twice), Manchester City (twice) or Manchester United (twice).
"West Bromwich Albion are the only team to cause a shock of this magnitude twice in the past 15 seasons - winning 3-2 at Arsenal in 2010-2011 and 1-0 at Manchester United last term."

Andros Townsend's spectacular 30-yard volley had a lot to do with Palace's unlikely win, but it also owed a lot to their defensive work, too.
Hodgson's team did an excellent job of stifling City - not for the first time in recent years.
Simon Gleave again explains more.
He says: "According to Gracenote's expected goals model, City's goal attempts on Saturday each had an average possibility of being scored of only 5.6%. According to our model, City's goal attempts this season across all matches have had an average possibility of 14.2% of going in.
"Palace reduced the chance of the average City goal attempt going in by more than 60%. Not only were relatively few chances created but those which were had a low chance of being scored.
"This is the second time that Palace have restricted the chances of Pep Guardiola team since Roy Hodgson became manager. On New Year's Eve last season, Palace drew 0-0 with City at Selhurst Park, missing a late penalty which would have confirmed a shock win.
"Similar to Saturday's game, there was an average 5.4% possibility of City's goal attempts going in in that match, compared to their season average of 13.9%."

Maddison leading England's schemers
Leicester midfielder James Maddison was in impressive form once more on Saturday, assisting Jamie Vardy's decisive goal in a 1-0 victory at Chelsea.
The 22-year-old has created 41 goalscoring chances in the Premier League this season, which puts him top of the pile among his fellow English players.

There are only two players who have created more chances in the league this season than Leicester's £20m summer signing from Norwich.
Eden Hazard leads the way with 48, followed by Chelsea team-mate Willian with 43, while Fulham's Jean-Michel Seri and Bournemouth's Scottish winger Ryan Fraser are level with Maddison, having also created 41 chances to date.
Burnley's long wait goes on
"So many decisions went against us," Burnley boss Sean Dyche said after Saturday's 3-1 defeat at Arsenal.
"The biggest one for me, I think it's 60 games now without a penalty, there was a two-handed push on Kevin Long but the penalty wasn't given because he goes down naturally," he told BBC Sport.
It was Arsenal defender Sead Kolasinac who appeared to shove Burnley defender Long in the box. Dyche was wrong with his figures though - it's now 61 games.
The last spot-kick Burnley were awarded came in a 3-1 loss at Everton on 15 April 2017. It was their sixth penalty awarded that season, but over the whole of 2017-18 they did not win a single one, and they are waiting still.
Manchester United and Bournemouth lead the way with six penalties awarded this season already, while last season Crystal Palace took a division-high 10 spot-kicks.
And finally: better festive signs for Liverpool

Tottenham's thrilling 6-2 win at Everton on Sunday confirmed it: 2018-19 is the first top-flight season to see at least three clubs go over 40 points by Christmas in 33 years.
Not since the 1985-86 campaign has it happened.
That season, six teams managed it: Manchester United, Liverpool, West Ham, Chelsea, Sheffield Wednesday and Everton.
The team who went on to win the title? Liverpool. They trailed United by four points on 25 December but went on to win by two points from Everton.
So perhaps there is no reason for fans of the Anfield club to hold back on the festive cheer after all...Source: bbc.com