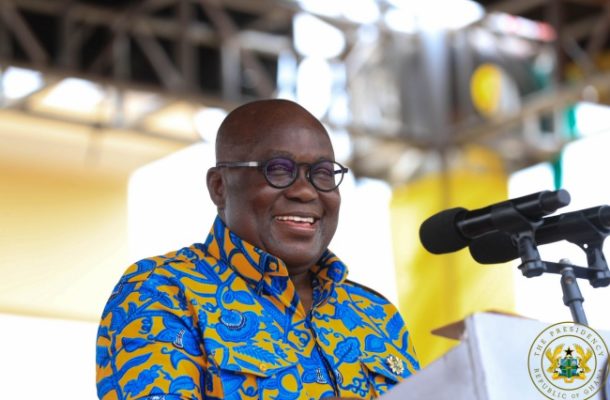 President Nana Addo Dankwa Akufo-Addo filed his nomination papers to lead the New Patriotic Party (NPP) to the December General Election with an advice to members to shun acrimony, which will cause the Party its deserving victory.

In their upcoming campaign for the Parliamentary Primary, scheduled for April 25, 2020, the President said bickering and quarrelling would only divide their ranks and rob them of the unity of purpose required for the national election.

The NPP has already witnessed some reports of acrimony in a few constituencies over some members complaining that they were being denied the opportunity to pick nomination forms, which opened a month ago.

Addressing hundreds of enthusiastic supporters who turned up at the party’s headquarters, in Accra, to witness the occasion, the President endorsed Vice President Dr. Mahamudu Bawumia as his running mate.

He was the only presidential aspirant who had filed his nomination papers at the close of nomination on Thursday, February 20.

He would, therefore, be acclaimed at as the Party’s flagbearer at a National Congress to be held simultaneously across the country on April 25, 2020.

The President urged supporters of the Party to also go out in their numbers to register when the Electoral Commission open the new biometric registration.

He also urged the electorate to vote massively for him and the NPP Parliamentary Candidates to continue with the life-changing policies programmes being implemented by his government.

“The hope of Ghanaians lie in the NPP and we cannot afford to disappoint them,” he stated.

President Nana Addo Dankwa Akufo-Addo expressed gratitude to all the rank and file of the NPP for the honour in making him the sole presidential aspirant and promised to work assiduously to retain power for the Party.

With a great deal of fanfare, the party faithful positioned themselves to welcome the President, who was accompanied by Dr. Mahamudu Bawumia; the Chief of Staff, Madam Akosua Frema Osei Opare; Minister of Communications, Mrs Ursula Owusu-Ekuful; NPP National Chairman, Mr Freddy Blay, Members of Parliament, National and Regional Executives, among others.

President Akufo-Addo teased Former President Mahama for campaigning for a comeback to continue from where he had left off, saying he wondered what kind of development the National Democratic Congress Party’s flagbearer would bring onboard since his previous administration saw backwardness in every aspect of the national life.

The President said the nation was moving forward and this could be seen with a number of innovative programmes and policies his government had implemented over the period, which was transforming the lives of millions of Ghanaians.

He said former President Mahama was not revealing anything new in his public engagements, but rather took pleasure in criticising and condemning every policy and intervention being rolled by his administration.

The President, however, acknowledged that there was more room for improvement in his achievements and gave the assurance to work harder to meet the aspirations of Ghanaians.

Early on, Mr John Boadu, the General Secretary of the NPP, told the gathering that the President had satisfied all the requirements spelt out in the Party’s regulations.

The NPP announced the opening of nomination for presidential and parliamentary primaries on January 20, this year.