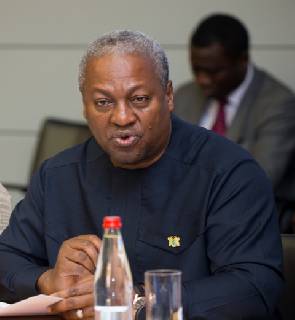 President John Dramani on Monday received letters of credence of 11 new envoys with the promise to scale up Ghana's relations with other countries in bilateral and diplomatic cooperation.

The others are: Mr Gerald Strikker of the Netherlands, Ms Heather Anne Cameron of Canada, Mr Giovanni Favilli of Italy and Mr Acisclo Valladares Molina of the Republic of Guatemala.

President Mahama gave the assurance that government would do everything under its purview to leverage the economy, a situation, he explained, would attract other countries to invest in Ghana.

He called for effective collaboration between Ghana and her partners in the areas of agriculture, oil and gas, engineering, education, health, water and sanitation and roads.

On the December polls, President Mahama gave the assurance that government would not do anything to undermine the peace and unity the country had enjoyed over the years.

"Government will do everything possible to ensure that there is peace before, during and after the general election, and therefore nothing will be done to affect our relations we enjoyed in the past."

He said Hungary has a lot of expertise in Petrol-chemicals and urged them to share their experiences and knowledge with Ghanaians to acquire adequate skills in addition to the scholarship scheme they had promised Ghanaians.

On Germany, President Mahama extolled them for their technical support to Ghana in the areas of peace training at the Kofi Annan peace Centre and the support from the numerous governance organizations.

President Mahama also lauded the Government of the Netherlands for supporting Ghana's School Feeding Programme adding that their tremendous support over the years has helped the country to raise the number of beneficiary children from almost 500 from the beginning to about 1.7 million children this year.

He said Italy had been a worthy partner of Ghana even before independence, the relations, which he indicated had risen to cover the areas of Small and Medium Term Enterprise support, Agriculture and gave the assurance that their cooperation would from now focus on agro-food processing.