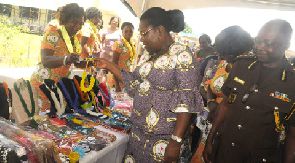 Although the 43 prisons in the country are to hold a total of 9,875 prisoners, they are currently holding 13,685 prisoners.

Out of the total number,189 are females.

According to the service, the convict population was 11,390, while those on remand were 2,295.

The acting Director General of the Ghana Prison Service, Mr Emmanuel Adzator, disclosed this at the launch of the 10th anniversary of the Prison Ladies Association Service (PRILAS) in Accra.

The one week celebration is on the theme: “Celebrating a proud past: empowering the female prison officer for excellence”.

According to Mr Adzator, the alarming fact was that 86 per cent of the convicts were aged between 18 and 45, making the convict population predominately youthful.

“The situation required of us to provide opportunities for the self-enhancement of the able bodied men and women in custody,” he stated.

He ,therefore, called for support to cater adequately for the welfare and training needs of the inmates.

Touching on the PRILAS anniversary, Mr Adzator congratulated the association and commended them for their relentless efforts in supporting themselves, as well as female inmates.

He urged them to develop their potentials, and position themselves to take up more challenging roles within the administrative set up of the service to support the transition from the old prison system to adopting new modern systems.

Women have moved from being matrons to constituting 33 per cent of the staff strengthen of 5,443, he said, adding that “they are gradually becoming a force to reckon with”.

In her address, the Minister of Gender, Children and Social Protection?, Nana Oye Lithur, said empowering female prison officers was essential to the development of the service and ,therefore, called for continuous investment in their capacity building.

She noted that the empowerment of female prison officers and other females depended on the government creating the enabling envrionment to ensure that all women were given equal opportunities.

It was for this reason that she said the government had taken the issues of women at heart to break the glass ceiling that existed in the public service by passing the National Gender Policy, as well as working to get the Affirmative Action Bill into law.

Earlier in her welcoming address, the President of PRILAS, Director of Prisons (DOP), Mrs Josephine Fredua-Agyemang, said the association, since it was established, had pursued its aims and objectives with enthusiasm.

She said the association had made numerous donations to various prison establishments and orphanages.

The association, in its effort to enlarge its outreach activities, inaugurated the Corrections Reforms Platform, a non-governmental organisation, in 2015 to solicit for funds for programmes geared towards the reformation and rehabilitation of convict prisoners, she added.