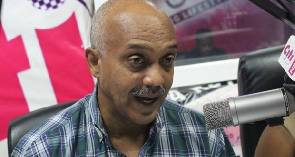 According to him, it was needless for Professor Martey to make the revelations if he did not accept the bribes that were allegedly offered him.

“I don’t see the purpose of what Rev. Martey has done. If he didn’t take the money then there’s no point talking about it. If he did take the money, then he should tell us who he took it from so that we can make our own decisions as to whether it’s a good thing or bad thing in society,” Casely-Hayford said on Citi FM’s news analysis programme, The Big Issue.

“I think that the revelation that somebody came to bribe me to keep my mouth quiet is a waste of the public’s time.”

He added however that, if the Presby Moderator felt strongly about the issue he should name the people who tried to induce him so that the public can get a better understanding of the matter.

“If the moderator is serious and feels passionately about what happened and that somebody is trying to influence him to keep quiet and he feels aggrieved about it, he should tell us who the person was. He should give us a name or names. It doesn’t matter if he can prosecute or not; at least he would bring up the matter and the public would be aware of what happened,” Sydney said.

“If it turns out that he’s not telling the truth and he puts someone’s name out in the public domain, then the person can sue him, we’ll know where we stand and the truth will come out.”

According to Sydney, the tendency of these public personalities to make allegations without mentioning the names of people involved was unfortunate and could lead to unnecessary panic.

“It’s a Jerry Rawlings thing. He’ll come and say there are people in the country who are trying to destabilize the country and turn us into a pack of beggars but he won’t tell you who. It’s fear-mongering and trying to make people worried and scared about things, trying to create some panic and mayhem”

The outspoken Moderator revealed last Tuesday that he rejected several attempts by politicians to buy his conscience with money and keep him from criticizing the government.

He claimed that he had been offered gifts by politicians including 100,000 dollars and a Trasacco House, all of which he rejected.

“Politicians had tried all means to muzzle me, to get me but they can’t, they come with bribes, fat envelopes, $100,000.”

He added that, some of these politicians also come with “the promises that if you keep quiet we will give you a house at Trasacco with swimming pool… We will give you Four Wheel drive [vehicle] but you know what; these people were lucky that I do not have big dogs in my house else I would have released the dogs for them to bite them,” Professor Martey added.

However, a former Public Relations Officer of the church, Emmanuel Osei Akyeampong, has said that Professor Martey accepted the bribe of $100,000, a claim which has since been denied by the Presbyterian Church. Source: Citifmonline.com