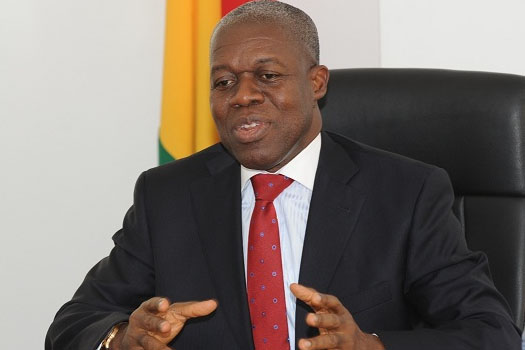 He entered Ghana's oldest Secondary School, Mfantsipim in Cape Coast later in 1964 and passed the GCE Ordinary Level in 1969 and the Advanced Level in 1971.

He secured admission at the University of Ghana, Legon as a freshman in 1971, graduating with a B.Sc. (Economics) degree in 1974.

Mr. Amissah Arthur was granted a University of Ghana Post-Graduate scholarship in 1975.

He was awarded the M.Sc (Economics) degree in 1980 and was immediately appointed to the Faculty of the Economics Department at the University of Ghana, where he lectured for a number of years.

He also lectured at the State College of Education, Awka in Anambra State of Nigeria from 1981-1983.

After retiring from public office in 1997, Vice President Amissah-Arthur continued to work on a number of consultancy jobs including that of Senior Economist for the Sigma One Corporation, Ghana, from 1998 to 2000 where he helped design and implement the Ghana Policy Dialogue Project, a USAID-funded project that provided advisory services to the Government of Ghana.

He also worked on the Trade and Investment Reform Project, aimed at enhancing Ghana's export competitiveness.

Between 2001 and 2002, the Vice President was contracted to execute a special assignment by the Danish Foreign Ministry.

He was a co-author of a review of Ghana's public financial management system, titled: 'Guidance Note: Financial Integration into Relevant Ghanaian Structures', a report that has been used as a training manual for new employees at the Finance Ministry.

Vice President Amissah-Arthur has also worked as a private international consultant/economist to the World Bank and some foreign countries.

As Consultant for the World Bank, he trained the staff of The Department of State for Agriculture, Republic of The Gambia in 1997 in initiating a review of the World Bank-funded Medium-term Expenditure Program.

He was the consultant at all stages of the Netherlands Government-funded Technical/Vocational Education project for Ghana's Ministry of Education in association with TNW Export BV of Waalwijk, Netherlands).

As part of his public service stewardship, Vice President Amissah-Arthur also served on a number of Boards and Committees including the Boards of the Bank of Ghana, Ghana Commercial Bank, Ghana National Petroleum Corporation, Ghana National Procurement Agency, Ghana Supply Commission, and the Academic Board and Finance Committee of the University of Ghana.

To demonstrate his commitment to the NDC party, Vice President Papa Kwesi Amissah-Arthur, after retiring from public office continued to work hard behind the scenes for the party during its turbulent days in opposition.

He single handedly commissioned and funded very crucial and important research activities for the party when it was in opposition.

It was therefore not a surprise when the late President Mills appointed him Governor of the Bank of Ghana on the 1st of October 2009 to replace Dr Paul Acquah.

He was a soccer enthusiast and a great fan of Accra Hearts of Oak, one of the leading football teams in Ghana, and enjoys playing table tennis in his leisure time.

Vice President Amissah-Arthur is a devoted family man. A Christian by faith, he holds firm to the belief that with God all things are possible.

He and his wife Matilda have two adult children who are budding professionals in their chosen fields of study.

His mission is to help maintain the economy as a strong platform for Ghana's development.

On August 6, 2012, Amissah Arthur was formally sworn-in as the Vice-President of the Republic of Ghana after being nominated by President John Dramani Mahama and ruled until they were voted out two years ago.