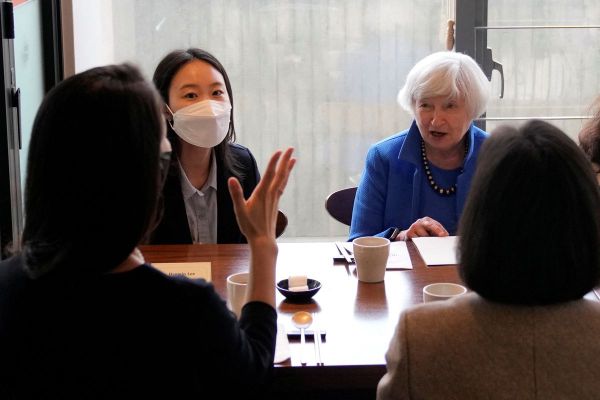 Boosting women's participation in the workforce and giving them more leadership opportunities would boost the economic potential of South Korea and the United States, U.S. Treasury Secretary Janet Yellen told a group of women entrepreneurs in Seoul.

Women represented a "huge untapped resource" for both the United States and South Korea, Yellen, the first woman to head the U.S. Treasury, told the women in remarks prepared for delivery during a lunch at a vegan restaurant in Seoul.

The comments come as the Biden administration is fighting to salvage key parts of its domestic agenda, including a funding boost for child care and universal preschool aimed at increasing the participation of women in the workforce.

President Joe Biden had hoped to pass major legislation that would have included such funding along with initiatives to combat climate change and raise taxes on big corporations, but has been stymied by the opposition of Democratic Senator Joe Manchin, whose vote is critical in the evenly split Senate.

Yellen told Reuters late on Monday that increasing access to paid leave and child care remained a priority for the Biden administration, adding: "We're not throwing in the towel on any of it."

In her meetings, Yellen noted that South Korean women are among the most educated in the Organisation of Economic Cooperation and Development countries but hold just 20% of management roles in South Korea. They are also more likely to be irregular workers and earn 31% less than men on average, the highest gap in the OECD, data from the organisation shows.

The International Monetary Fund estimates that closing the gender gap in labour force participation could boost South Korea's real gross domestic product by 2035 by more than 7%. "Women should be given the ability to stay in the workforce," Yellen said, adding that many Korean women faced pressure to stay home and raise families. Women everywhere were also held back from rising to senior jobs in public service and the private sector - even in advanced economies such as the United States.

A Treasury official said the conversation focused on the challenges of moving ahead in the tech sector while balancing careers and families, a theme echoed during a subsequent meeting Yellen held with women economists from the Bank of Korea.

"The challenges women face are much more pronounced in the finance and tech sector," she told Reuters. "We are fully aware of the fact that we are setting an example for the next generation to come."

In her meeting with Bank of Korea economists, Yellen shared her own experiences in the male-dominated profession of economics, and said she was ultimately able to juggle both a family and career because she married a man who "strongly believed in a fair division of labor in our household".

She said she had worked for years to expand the relatively low number of women who studied economics in the United States and pushed to increase the "disappointingly low" number of women in senior roles at the Federal Reserve when she was there.

The economists presented Yellen with a plaque that said her legacy had inspired them to "learn more, do more, and become more".