Prophet Mohammed Would Have Rejected Your “Nasty” NDC And Voted NPP 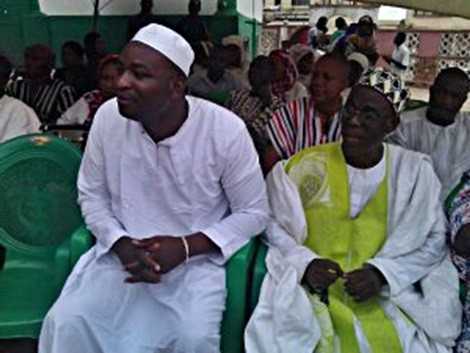 If today had been the era in which Prophet Mohammed lived, the Ashanti Regional Chairman of the New Patriotic Party claims he would have openly supported the NPP rather than a “nasty” political party like the National Democratic Congress (NDC).

Mr. Bernard Anwti-Boasiako has said the level of religious bigotry in the NDC has reached an ugly point making it easier for adults like Alhaji Collins Dauda to spew garbage that should only be recited in a mental home.

Local Government and Rural Development Minister, Alhaji Collins Dauda, is in the news for advising Ghanaian Muslims to vote against the NPP and its presidential candidate if they do not want to suffer discrimination.

He also stated that Muslims who are live under an Akufo-Addo led regime are bound to taste the hatred politicians inspired by the Danquah-Busia-Dombo tradition have for Muslims.

"The NPP looked into my face and told me that because I am Morsi, I am not a Ghanaian and they challenge me to go to court until the court cleared me.
These are the people we are talking about. My brothers and sisters, must you entertain someone who has hurt and deprived you in the past? These UP people are not people that the NDC and Muslims must listen to and trust,” he said in an address to some Muslim youth in Koforidua in the Eastern region.

But the Mr. Bernard Anwti-Boasiako who is popularly known in the political circle as Chairman Wontumi tellsPeacefmonline.com that the NDC has now realized that several Zongo communities who are buying into the policies of the NPP and to make an immediate amendment, they have resorted to making reckless statements.

Aside Alhaji Collins Dauda, Chairman Wontumi alleges President Mahama has also been “reckless” when it comes to wooing electorates to his side.

“Recently we had a president who went to Mamprugu in the Northern Region just to tell a gathering that they must reject Dr. Alhaji Mahamadu Bawumia because he isn’t their biological brother and might turn out not to be their real brother”.

“When you have a president and minister talking in this bigotry and reckless manner, it explains to you that they are coming from a political party made up of divisive people. They only wish we had a divided Ghana”, he said.

He added that unlike President John Dramani Mahama who visited only the Andani Gate during his recent visit to Yendi, Nana Addo Dankwa Akufo-Addo, demonstrated leadership by visiting both the Andani and Abudu Gates during a visit to the same area.

Nana Akufo Addo recently visited the Gbewaa Palace where he interacted with the Regent, Kampankuyanaa Abdulai Andani, and his elders.

He later received a similar reception at the palace of the Bolin-Lana, who urged him to remain committed to the national good as he goes about his campaign activities.

“Between Nana Addo and President Mahama, who would you say comes from a political party that has love for Muslims?” he asked.