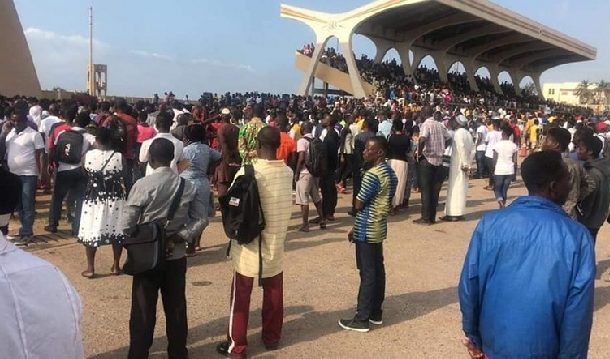 The National Council of Parent-Teacher Associations of Ghana has fingered the Ghana Education Service in the ongoing school placement brouhaha.

The council indicated that underhand dealings of some officials of the GES is partly to blame for the fiasco.

They also advised parents to “assess their wards’ academic strength when choosing schools for them” to avoid challenges such as the ones currently being faced in the ongoing senior high school placement exercise.

In a statement released on Wednesday, 17 September 2019 and signed by its National President, Mr Yaw Danso, the Parent-Teacher Associations Council of Ghana said it has “noted with grave concern the ordeal that parents are going through, particularly, at the Independence Square in Accra” to seek placement for their children and wards.

The council enumerated the challenges as including non-placement, issues with self-placement, mal-functional placement modules put in place by the Computerised School Selection and Placement Centre (CSSPC), changing of courses and schools as well as changing boarders to day-time students and deletion of names from list of admitted students among others.

According to the council, these challenges and “more have always characterised the placement process since its inception over a decade ago and continues to recur, yet no known or proper solutions have been found to either ameliorate or completely wean parents and their children/wards off what is fast-becoming an annual ritual.”

It continued that it is saddened that “innocent parents and students are being subjected to this psychological trauma under the scorching sun for which reason some have collapsed” and said “it shares the pain and frustration with the parents and students, especially those who collapsed.”

The council, however, advised parents to “assess their children/wards’ academic strength when choosing schools for them in order to avoid this unpleasant situation.”

It further reminded parents that “the era where human involvement in school selection was rife is over”, adding: “Let the choice of schools involve parents, teachers and candidates and not be left to teachers alone to do so” in order to avert such situations and frustrations.

The council traced the “footprints of this unfortunate fiasco of the process to the Ministry of Education and Ghana Education Service (GES)”.

“The GES’ lackluster implementation of the placement process and underhand dealings have cumulatively resulted in the unfortunate situation we are all witnesses to both locally and internationally.”

It also called on the Ministry of Education and the GES to take urgent steps to rid the placement process of these “easily solvable problems associated with it” as a repetition of the current challenges next year will not be countenanced.