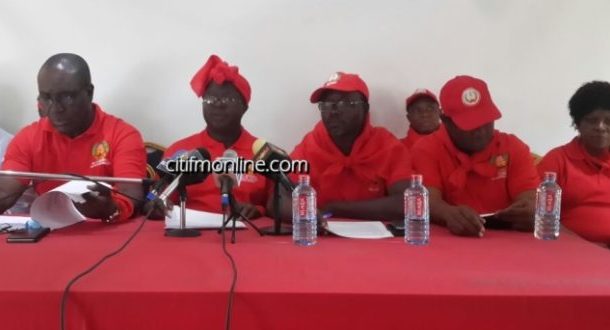 The Public Utilities Workers Union (PUWU), has declared a three-day demonstration nationwide beginning Wednesday, August 24, 2016. The demonstration according to PUWU, will last 3 hours each day from 8:00am to 11:00am, and it is in protest against the privatization of the Electricity Company of Ghana (ECG). The protest is expected to take place in the various offices of ECG across the country.

“To buttress our resolve and determination to resist this privatization process, the leadership of the workers has decided that there will be a three-hour demonstration in the regional and district offices of ECG every morning from Wednesday, August 24, 2016 from 8:00 am to 11:00 am up to Friday, August 26, 2016.

The red flags will continue to fly until further notice,” General Secretary of PUWU,” Micheal Adumatta Nyantakyi, explained. PUWU has also called on government to review the Millennium Challenge Corporation (MCC) compact which seeks to cede the ECG to private investors for a period of 25 years. Addressing the media in Accra today [Tuesday], the General Secretary of PUWU, Micheal Adumatta Nyantakyi, noted that, until their demands are met, they will not back down their decision.

He explained that “we are not asking the government of Ghana to abrogate the MCC compact; but we are requesting that GOG and MCC should review the Compact.” Mr. Nyantakyi insisted that, the section which touches on “Private Sector Participation (PSP) as a condition precedent and trigger for entry into force should be modified; to include pragmatic steps or measures that can bring efficiency and profitability to ECG (using the disciplined leadership and governance transformation method).”

PUWU has within the last few months staged a demonstration against the privatization of ECG; but government has insisted that the move is to make ECG efficient. Mr. Nyantakyi noted that “the union has not changed its position to the effect that we object and are vehemently against the decision to give ECG out to a private investor under a concession arrangement for a period of 25 years.” “…We do hereby reiterate that this policy decision is not the best option for Ghana and the position of the staff of ECG under the Public Utility Workers Union, had been clearly articulated in our position paper issued in the early part of 2015.

This policy is not the best option to bring reforms to make ECG more efficient and profitable. We have already articulated our views and suggestion in our position paper to MiDA and the Ministry of Power. Unfortunately, the government of Ghana with tacit pressure from MCC of the United States of America, is still pushing this agenda despite all the negative implications for our country and its citizens.”