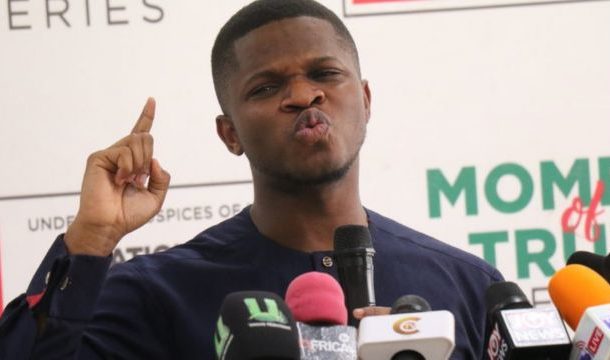 The National Democratic Congress (NDC) has reacted to the ruling by the Cape Coast High Court that has declared the 2020 parliamentary election held in the Assin North Constituency as null and void.

The court presided over by Justice Kwasi Boakye on Wednesday, July 28, 2021, ruled that the NDC's parliamentary candidate for the constituency, Joe Gyaakye Quayson breached the provisions of the constitution with regard to dual citizenship.

But, the Communications Officer of the party, Sammy Gyamfi, believes the court processes were compromised.

In a lengthy writeup on Facebook to register his disapproval of the ruling, he blamed the Registrar of the Cape Coast High Court, Ustaz Hamza and other judicial officers of manipulating the court processes in favour of the ruling New Patriotic Party (NPP).

According to him, the court officials "frustrated and prevented the filing of a formal application by lawyers of the Assin North MP this morning, for the trial Court to refer the Consitutional questions that have arisen in the conduct of the case to the Supreme Court for determination before proceeding to give judgement."

Sammy Gyamfi among other things condemned the judicial officers for failing to exhibit professional ethics. He, therefore, intimated that their day of reckoning will surely come.

Read his full write-up below:

I have taken notice of a decision by the Cape Coast High Court that has annulled the Assin North Parliamentary Election, held on December 7, 2020.

1. First and foremost, let me condemn in no uncertain terms, the shameful manipulation of court processes by the Registrar, Ustaz Hamza of the Cape Coast High Court and other judicial officers of the Court that frustrated and prevented the filing of a formal application by lawyers of the Assin North MP this morning, for the trial Court to refer the Consitutional questions that have arisen in the conduct of the case to the Supreme Court for determination before proceeding to give judgement.

It is reprehensible and appalling to say the least, that Judicial officers who are paid by the State and are supposed to exhibit independence, impartiality and professionalism in their work have compromised their integrity and lent themselves as pliant tools for the manipulation of judicial processes in favor of the ruling New Patriotic Party. The day of reckoning and accountability for those unprofessional and partisan judicial officers will surely come.

2. Let me make the point that the judgment of the trial Court is fraught with many errors of law which have ccasioned a gross miscarriage of justice to the people of Assin North. The decision by the trial judge that Hon. Quayson was not qualified to contest as MP in the December 2020 elections is contrary to section 20(1)(d) of the Representation of People’s Law, PNDC Law 284 and a true a proper interpretation of Article 94(2)(a) of the 1992 Constitution, both of which provides in effect that, a person must be qualified to contest as MP at THE TIME OF HIS ELECTION and at the time of him becoming an MP (that’s at the time of swearing in) respectively.

3. It is the considered view of the NDC, that Hon. James Quayson was qualified to contest as MP in the December 2020 elections by virtue of the fact that he applied to renounce his Canadian citizenship before he filed his nominations to contest as MP in October 2020. He was actually issued a certificate of renunciation in November 2020 before the Parliamentary Election on December 7, 2020. He was therefore qualified to be MP at the time of his election as required by section 20(1)(d) of PNDC law 284 and at the time of his swearing-in, as prescribed under Arricle 94(2)(a) of the Constitution. The December 2020 Assin North Parliamentary election in question was therefore lawful and valid in our view and we think the trial judge has erred in annulling same.

4. The claim by the trial judge that the Supreme Court has determined in the “Zanetor case” that a person must be qualified to be an MP at the time of the issuance of the Notice of Poll/opening of nominations by the Electoral Commission and that Hon. Quayson was not qualified to contest as MP because even though he had applied to renounce his Canadian citizenship, he had not been issued with a renunciation certificate as at the time of Nominations in October 2020, is palpably misconceived.

This is because the Zanetor case bordered Article 94(1) of the 1992 Constitution relative to the requirement for a person to be a Registered Voter before he can become an MP. The Assin North case on the other hand borders on Article 94(2)(a) of the Constitution which provides that a person shall not be qualified to be a Member of Parliament, “if he owes Allegiance to any country other than Ghana”. We therefore hold the view, that the two cases are materially distinguishable.

5. Note that Section 20(1)(d) PNDC law 284, provides clearly that a person must be qualified to contest as MP at the time of the election relative to the issue of allegiance to a country other than Ghana. Also, note that Article 94(2)(a) was not interpreted by the Supreme Court in the Zanetor case which is the ratio the trial Judge appears to have applied in the Assin North case.

7. It is instructive to note, that when Hon Quayson filed his nominations in October 2020, some NPP people within the Assin North constituency petitioned the District Office of the Electoral Commission for him to be disqualified on grounds that he is a citizen of, and owes Allegiance to Canada. The District EC officer then referred the matter to the Headquarters of the EC for determination. The EC demanded that Hon. Quayson provides or adduces his certificate of renunciation of his Canadian Citizenship which he did. It was on this basis that the petition was dismissed and Hon. Quayson cleared to contest.

8. Let me put on record that the NDC is not afraid of any by-election. We are confident of victory in any by-Election if we get to that stage. All we want is for justice to be done. And we will stop at nothing to ensure that justice is done.

9. Our lawyers will apply for a Stay of Execution of the orders of the trial judge and Appeal the flawed judgment ASAP. This travesty of justice will not be allowed to stand.

10. The NDC is also determined to formally petition the Judicial Service for disciplinary action to be taken against the Registrar and other Judicial Officers of the Cape Coast High Court who engaged in those shameful gymnastics earlier this morning. Such partisan and unscrupulous persons are not fit to serve in that respectable independent arm of government.