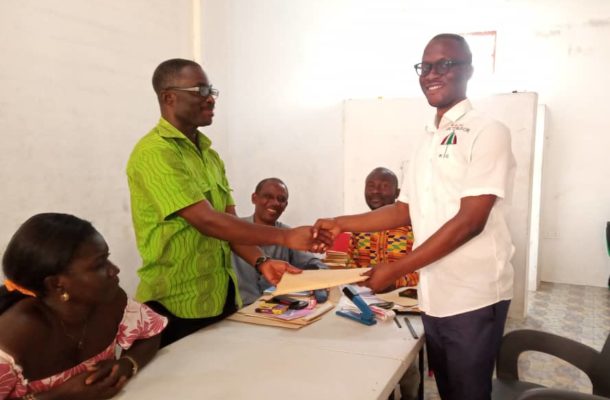 Ralph was accompanied by a huge crowd comprising several youth and party members to the NDC’s office in Sowutuom, on Thursday 29 September, 2022, where he submitted his completed form.

Ralph Apetorgbor who defied the heavy rains was met on arrival by Kwame Asare Obeng, the constituency electoral committee member, who accepted the nomination form after checking them to verify whether the necessary information had been provided.

The NDC is expected to vet all the aspirants on September 30, ahead of the Constituency Conference scheduled to take place at the Deoke Foundation School within the constituency on October 22.

Addressing media colleagues and supporters after filing his nomination, Ralph Apetorgbor could not contain his emotions as he was overwhelmed by the outpouring of love and support from branch executives from across the constituency who gathered at the constituency office.

Apetorgbor promised to continue offering communication leadership for the NDC in the constituency by bringing his “Proactiveness, Expertise and Experience” (or PEE skills) to the advantage of the party’s presidential and parliamentary election campaigns.

Ralph Apetorgbor who also works as a communications specialist, explained that his aim was to see the NDC win election 2024, become the incumbent party in 2025 and through that develop the constituency in diverse ways.

“I am forever indebted to you for your continuous support,” Ralph Apetorgbor stated with emotion in his voice, given the show of support and cheers. “I will never take you for granted for this huge confidence reposed in him.”

Ralph is being contested by three other aspirants for the same position.

Ralph Apetorgbor is a journalist, policy analyst and administrator who has worked with several media houses in Ghana, including The Ghanaian Times, Spectator, Daily Express and Telegraph; and researcher at Parliament House.

He has contributed enormously to the NDC at both National, Regional, and Constituency party levels.

He is the current NDC Deputy Communication Officer for Anyaa Sowutuom, a member of the National IT Directorate; Secretary to the National Collation Committee of the NDC, former President of Pentecost University branch of the Tertiary Education Institution Network (TEIN) of the NDC; former branch Secretary; and a former polling agent.