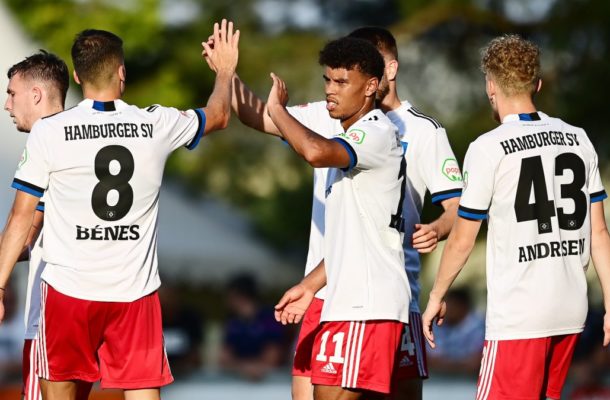 New Black Stars boy Ransford-Yeboah Königsdörffer scored his first goal for his new side Hamburger SV(HSV) in a pre-season friendly match against Croatian side Hajduk Split.

The winger  who joined the Bundesliga II side from Dynamo Dresden after a protracted transfer helped his side secure a 2-2 draw with a last minute goal  after coming on as a substitute in the second half.

Hajduk Split took the lead in the game in the 28th minute through Livaja before the German side equalized through Robert Glatzel in the 33rd minute.

After a free-kick from Miro Muheim, Jonas David was initially denied by Split's goalkeeper, but Robert Glatzel made it 1-1 for HSV.

The first half ended 1-1 as there was nothing to separate both sides but the German-born Ghanaian Yeboah-Konigsdorffer was introduced into the game in the second half.

HSV fell behind again after a defensive lapse between goalkeeper Daniel Heuer Fernandes and central defender Mario Vuskovic, Splits' Cubelic intervened tapped home in to make it 2-1 for the Croatians in the 68th minue.

Shortly before the end of the game, Hamburg managed to equalize. After a cross, Vuskovic climbed the highest and laid it down for Königsdörffer, who has an easy tap in from six meters  to make it 2-2 in the 88th minute.