Raphael Dwamena given extension at Zaragoza 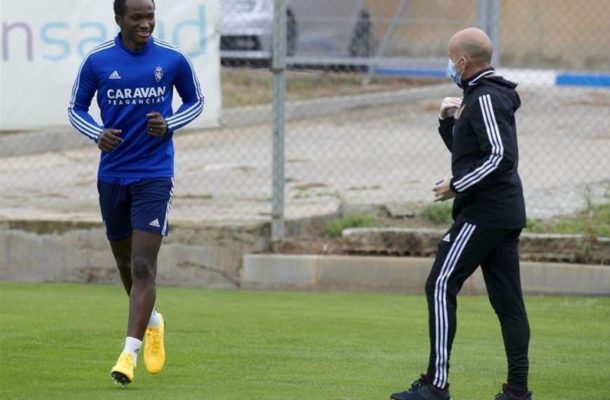 Ghanaian international has been an extensive stay at Zaragoza till the end of the season following the official expiration of his contract on June 30th.

The spanish season has been extended due to the coronovirus pandemic that has all competitions.

Raphael Dwamena, whose loan ends tomorrow, Tuesday June 30 , will end the season at Real Zaragoza and will continue exercising at the Ciudad Deportiva until the end of the competition, scheduled for the regular tournament on July 19.

The Aragonese club, after speaking with Levante, owner of the footballer's rights, with an indefinite leave due to a heart condition, will have the battering ram for the duration of the competition, although he will not play any minute this season. Zaragoza has taken over the entire tip sheet, which amounts to around 800,000 euros and the footballer wants to end the season at the Aragonese club and, if necessary, be one more in celebrating the desired promotion to First.

The LaLiga clubs have reached agreements on the transfers of footballers without these implying an added cost for the destination teams and in the case of Dwamena their special situation has not prevented the season from finally ending, after the break due to the coronavirus , carrying out the rehabilitation work carried out in recent months.


The striker was discharged by Zaragoza last November after suffering several episodes of dizziness in some matches and training in October. The last game he played was against Cádiz on October 9, with 649 minutes and two goals before he had to leave football practice indefinitely . He was consulting various specialists, in Barcelona, ​​in Zurich and also in Ghana, his country of origin, and was successfully operated on at the Miguel Servet University Hospital in the Aragonese capital at the end of January. The operation consisted of two phases: the first one consisted of carrying out an electrophysiological study and, later, the implantation of a DAI (Automatic Implantable Defibrillator) that protects you in the event of serious arrhythmias.

The player has been exercising on the grass since April and in recent weeks he has also increased the intensity in some work, making changes in pace, for example, but his return to the grass is not close. He will not, of course, at Zaragoza and Levante is not in favor of, when he returns, that he continues to belong to the discipline of the granota club.

Dwamena is still determined to play again and his idea is to try to find in a few months a club where he can continue his career. The striker, an example of professionalism and good character, has left a deep mark on Zaragoza's dressing room, where everyone has turned to his support in recent months. The striker, with deep religious convictions and always very involved in supporting solidarity causes, has the affection of the entire club.

After finishing this assignment, his career faces the next step in Levante, where the intention of the granota entity is to terminate the contract that it has for two more years. They have not yet sat down to talk about it, but it can be taken for sure that the Valencian club, with more than 35 footballers on payroll for next season, will seek that pact. Dwamena's options would be to seek football accommodation in his country or try it in Switzerland, where he played very well at Zürich. The problem is their medical history, with the risk that this bet can entail for any club. In 2017 Dwamena was about to sign for Brighton, but did not pass the medical examination for a heart problem, which he found a remedy with the implantation of a holter.