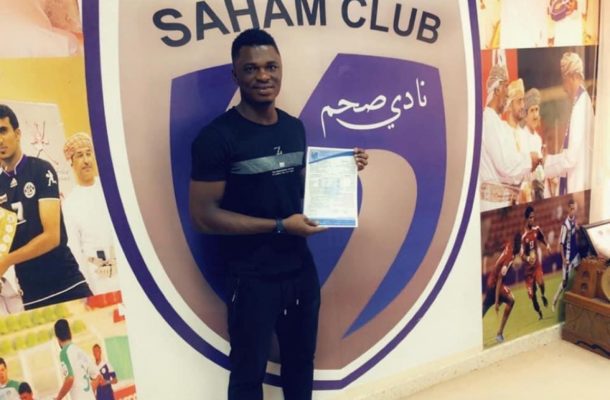 Ghana defender Rashid Sumaila has signed for Omani top side Saham Club in a three-year deal.

The former Asante Kotoko and Dwarfs defender relaunches his Professional career with the Blue Waves 15 months after leaving Al Qadsia of Kuwait.

Sumaila, 28, had been without a club since July 2020 after leaving Kuwaiti giants Al Qadsia were he won the 2017/18 Kuwait Crown Prince Cup with the Yellow Castle.

He was part of Mamelodi Sundowns winning squad that clinched the 2013/14 Premier Soccer League (PSL) and was named in Ghana's squad for the 2014 FIFA World Cup in Brazil.

Sumaila made a huge impact in the Ghana Premier League while playing for Ebusua Dwarfs, winning th Best Defender for the 2010/11 season.

He then joined Asante Kotoko where he won the Ghana Premier League with the Reds.

He moved to Memelodi Sundowns in 2013 before moving to Kuwaiti powerhouse Al Qadsia in 2015 for an undisclosed fee.

He won three trophies for the club during his spell, being voted Al Qadsia Player of the Season twice.

The former Ghana U20 guardsman left Al Qadsia SC, to play on loan for Qatari side Al Gharafa and Red Star Belgrade in Serbia between 2015 and 2019.

He returned to Al Qadsia in 2019 after winning the 2018/19 Serbian Super League title with Red Star Belgrade, making only three appearances for the club.

The former Asante Kotoko and Ebusua Dwarfs star has capped nine times for the senior national team of Ghana.