Rawlings hits back at Kwesi Adu, challenges him to ‘open his mind and eyes’ 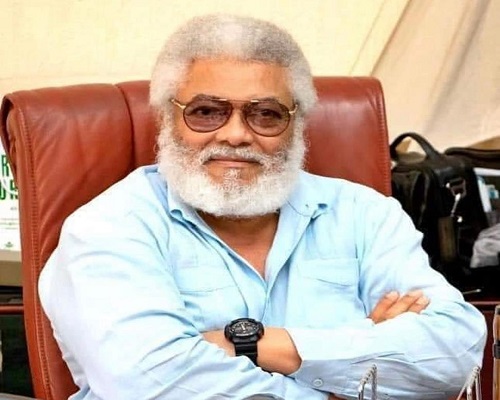 The founder of the National Democratic Congress (NDC), Flt. Lt. Jerry John Rawlings, has taken a swipe at one Mr. Kwesi Adu, asking him to open his “mind and eyes to some political machinations and vicious politics” in Ghana.

In a statement sighted by Angelonline.com, Mr. Rawlings said, “I had also hoped that since your return you would also have gained a closer insight into the challenges the forces of virtue and right have been facing against the forces who profit from social and economic corruption… on all sides”.

Mr. Kwesi Adu had earlier written that “Flt. Lt. Rawlings has always laid claim to every word from him as the truth, so much so that, he is known to challenge the public and anyone, who contradicts his version of events, to be prepared to be subjected to (what he calls) ‘chemical interrogation’before a village shrine or to a lie detector. And because no one has so far taken up his offer to such a “chemical interrogation” he has grown to believe that he is the ultimate repository of truth in this country”.

However, former President Rawlings replied that even though Mr. Adu has been very selective about certain events and tried to create a mean picture of him [Rawlings], he still believes that Mr. Adu is not a mean-spirited person.

Mr. Rawlings asked him to re-collect and put himself together to join up the complex struggle with and on behalf of the good people of Ghana.

“In spite of some of your misperceptions about me, I still believe that you are still one of the few who should rejoin the forces of right and conviction to carry on the struggle”, he added.

According to Flt. Lt. Jerry John Rawlings, “personalities like Agyekum of the Eastern Region, Dr. Tony Aidoo, Goosie Tanoh, Dr. Amanor-Wilks and several others are still very much on the ground with their integrity intact. We do not hold hands, we have our little differences but I know and believe that we are moving in the same direction”.

“In addition to any suggestions from you [Mr. Adu] and any from other vile minds that you and I should know, I would want to suggest a few painful events like the killing of the Yaa Naa and his 39 elders, the masterminds behind the killing of the 34 women in my last term in office, and the several other malicious plots and lies that have been cooked up and persistently served to the people since the inception of the 79 revolt, and especially because of my refusal to let go of my integrity”, Mr. Rawlings’ statement read.

He further said he would love to shock Ghanaians and the world with the exposure of the odious characters who seem to have gotten away with atrocities they committed because of the weakness of the Ghanaian justice system.

He concluded that justice was delivered after the judges were murdered, however, the Yaa Naa and the 39 souls are yet to see one act of justice.
Angelonline