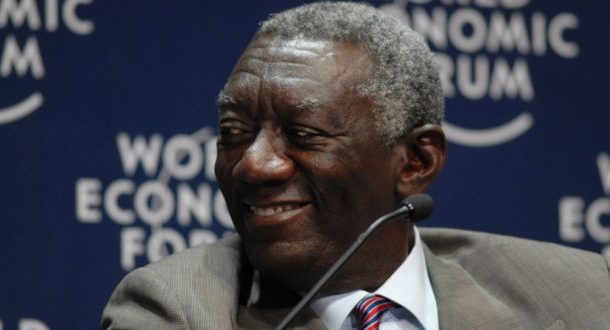 Former President John Agyekum in chronicling his journey into politics and subsequently the presidency; has stated that it took him a great deal of determination to win the election of 2000, after his defeat to the NDC’s Jerry John Rawlings in 1996, a man he describes as a “superman” at the time.

Mr. Kufuor, who lost the 1996 elections after he took over the flagbearership baton from the late Adu-Boahene, won a rather crucial election in the year 2000, and left office in 2008 after serving the two mandatory terms.

Mr. Kufuor was speaking at the ‘DreamOval Thoughts Transfer Series’ which is a monthly forum that focuses on inspiring and nurturing young minds to do. The former President made the comment whiles he was answering a question from a student journalist, who wanted to know his source of strength that catapulted him from being a lawyer, serving a 15-month jail term, and several other hurdles to the presidency.

“I had seen that the problem confronting the nation and societies might be tackled through some sound preparation of anyone who wanted to engage in tackling them and to me it was politics. The strength came from the exposure I had to the difficulties of a young country struggling to establish itself as a nation. That’s where I gained the missionary zeal I am talking about.

You see the difficulties and you know that if you misstep you might be done away with, but because you believe in yourself that given the chance you can make a difference; that’s what keeps you going against every odds.”

“…That’s why in 1992 when I went for my party’s nomination I was rejected but I went again, and the same people who rejected me in 1992, said yes to me in 1996 to challenge Rawlings. And Rawlings was like a superman then. But when he was declared winner I said don’t worry; he [Rawlings] signed the constitution that provided for only two terms so let’s see whether he wouldn’t step down after 2000. Fortunately, he stepped down for late President Mills to come and thankfully Ghanaians gave it to me. So it’s about nurturing yourself to pursue realistically and pragmatically the things that you see in your vision that you believe given the chance you can help make a difference. Nurturing, perseverance, and persistence – those were the driving forces behind me.

Then there is grace and knowledge; whatever you are doing I believe in God’s mercies so grace should be there. But it’s the same God that endowed us with knowledge and as the adage goes, God helps those who help themselves.”