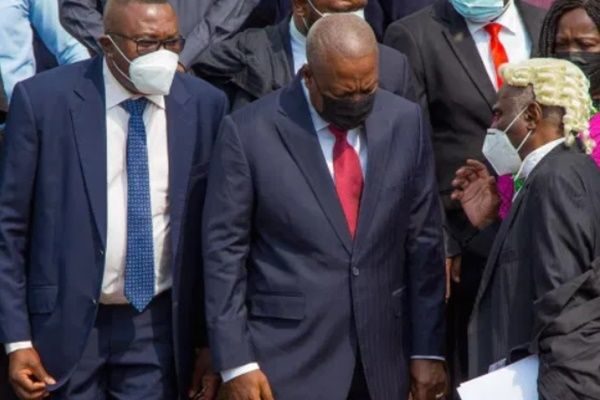 Mr John Dramani Mahama’s hope of a reversal of a decision by the Supreme Court not to allow him to reopen his case in the ongoing Presidential Election Petition case, were dashed when a nine-member panel of Supreme Court justices, on Monday, February 22, 2020, upheld an earlier ruling by the same court when it dismissed the application by the Petitioner.

Mr Mahama was contesting a ruling by the court on Friday, he contended as a miscarriage of justice, which prevented him from reopening his case.

Lawyers for the Petitioner had earlier placed the same request before the original 7 judges hearing the case saying they intend to subpoena EC Chairperson Jean Mensa to testify.

That application was however dismissed.

In delivering the ruling, the Chief Justice, Anin Yeboah said that the lawyers for the petitioner have failed to persuade the panel to grant the motion.

"A mere filing of a witness statement is not an election to testify," Justice Anin Yeboah said.

"As we’ve already indicated in this ruling supra, the petitioner in this application has not given us an inkling of the new or fresh evidence he wants to bring to the fore through the Chairperson of the first respondent and how that evidence could assist the court to do justice to the matters under consideration in this petition. Neither has he disclosed how that evidence will advance the cause of his petition,” he added.

Not satisfied, Mr. Mahama directed his legal team to file for a review of that decision since they believe the apex court made fundamental errors in its earlier ruling.

“I am advised by counsel and verily believe the court made fundamental errors of law including the ruling being per incuriam of constitutional provisions, statutes and previous decisions of the Supreme Court.

“Among these errors, I am advised by counsel and verily believe is an error whereby the court's subordinates a provision in the Evidence Act to a rule in subsidiary legislation by the Rules of Court Committee,” the application added.

But not even the quoting of scripture by Tsatsu Tsikata, lead counsel for Mahama, asking the nine justices reviewing the case to be guided by Hosea 8:7, could aid in the granting of his request.

It states: “For they have sown the wind, and they shall reap the whirlwind: it hath no stalk: the bud shall yield no meal: if so be it yield, the strangers shall swallow it up.”

As a matter of course, Counsels for the 1st and 2nd respondents, Justin Amenuvor and Akoto Ampaw, respectively, opposed the Petitioner’s review application and prayed the Court to summarily dismiss it.

To them, Counsel for the Petitioner only rehashed arguments already ruled on by the court.

After hearing oral arguments from all parties, the 9-member justices affirmed the decision of the 7-member panel.

The ruling read by Chief Justice Anin Yeboah said the application was not based on law and that review discretion is not a try on and neither should it be asked on emotional grounds.

"we dismiss this application....it holds no merit"