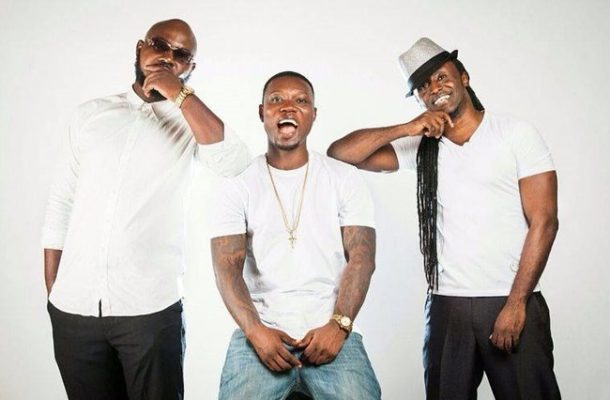 Reports reaching the media is that hiplife grandpapa Reggie Rockstone is no longer a member of VVIP.

Although it is unclear what may have caused this separation, reports indicate that all is not well with the group which is also made up of Zeal and Prodigal.

The members have not done any collaborative work for the past year.

The hiplife grandpapa has not been seen performing with his team members on stage, a recent instance being their appearance at the 2019 Sallafest on June 5 at Nima in Accra

Although in an interview with Graphic Showbiz he said there had been no talks of him leaving yet, Reggie Rockstone has been embarking on a lot of solo projects recently.

He has released a couple of works including ‘11:11’ which features rapper Sarkodie.

This will be the second time a member has left the group.

VVIP began its career as VIP meaning Vision in Progress in the 1990s.

VIP was founded by Friction (Musah Haruna) and an unnamed friend who later left the group for the U.S. to finish his education. Friction later assembled four young talented musicians, Promzy, Lazzy, Prodigal, Bone to form the group. Bone left shortly after that.

Friction, after VIP released their second album, left the group explaining he felt it was time for him to embark on a solo career.

The remaining members Emmanuel Ababio (Promzy), Joseph Nana Ofori (Prodigal), and Abdul Hamid Ibrahim (Lazzy now Zeal), went commercial in 1998 and over the years has been one of, if not, Ghana's best music groups.

However, after almost two decades of doing music with the group, Promzy in 2013 embarked on a solo project.

Bulldog, then the group's manager of VIP noted, "have come very far and they will not in any way disappoint [their fans]."

Indeed they exceeded expectations when the hiplife grandpapa was recruited to join the group.

Out with the old in with the new – the birth of VVIP!

Remaining members Zeal and Prodigal were determined to give Ghana the best of best and had to birth a new strategy after the breakup.

The Hiplife grandpapa born Reginald Yaw Asante Osei in 2014 was announced as the new plan and the new member.

After joining, the group was renamed VVIP but a lot of controversies circled it and its change.

Former member, Promzy in an interview with Clock Newspaper alleged Reggie Rockstone was the masterminded the plan for his sack from the group.

Promzy said, “we were cool and had plans for a new project underway, only for me to hear that I had been replaced by Reggie.”

Unhappy with the accusations, Rockstone took to Twitter to dismiss accusations, “It just hit me that my actual joining of da group VIP started as a joke on here! Remember? YALL are my witnesses… b4 lazy n prod erd it! LIFE.”

Rockstone’s new teammate Zeal also in an interview Promzy had wanted to leave even before the thought of recruiting Reggie had formed.

He explained the team had failed to convince Promy to stay, “however, before he even came to us this last time, he had already started his own solo career with a recording.”

It has been more than a year since music group VVIP released a song, though members keep embarking on solo projects.

According to a source, who is related to the music group, it has decided to keep this to themselves for now and will announce it soon

We now understands their denials and the excuse of embarking on a solo project.

The reason why he’s leaving is not yet known. Follow us for more updates on this particular subject.