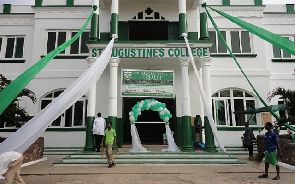 The Board of Governors of St Augustine’s College, has slammed the interdiction of Mr Joseph Connel, the school’s Head Master, saying the action was not premised on the needed investigations and natural justice.

Mr Connel was interdicted on the premise that he collected unapproved fees and the Board at an emergency meeting on Monday, October 17, asked that the decision should be reversed.

At the meeting the Headmaster and Accountant were invited to brief the Board about the purported charging of unapproved fees.

The members also questioned why the Central Regional Director of Education should exempt himself from the emergency meeting that interdicted Mr Connel but rather chose to solely nominate someone to represent him on the Board in an investigative committee.

“In view of the above the Board of Governors having considered the issues mentioned Supra, is of the opinion that the interdiction of the Headmaster was done and not premised on needed investigation as natural justice and request that it should be reversed.”

In a related development a letter written by the Regional Director and addressed to the Board Chairman had requested the Headmaster or his representative to join the committee undertaking the investigations.

The letter dated October 14 was delivered on Tuesday, October 18.