Remission for Montie 3 will not affect our votes - Ampofo 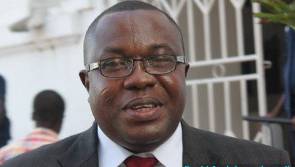 The Director of Elections for the ruling National Democratic Congress (NDC) Samuel Ofosu Ampofo has debunked assertion that the remission of the Montie trio will affect their chances of retaining seat.

According to him, the decision taken by the President John Dramani to repeal the Supreme Court order will not have dire consequences on the National Democratic Congress (NDC) results come December 7, 2016.

Speaking on Abusua FM’s Abusua Nkommo hosted by Kwame Adinkrah, he said the electorate will not rescind their decision on voting massively for President Mahama.

The President upon the Council of State recommendations on Monday freed the Montie three who were cited for contempt for threatening the lives of the Supreme Court Judges on a live political talk show.

The decision has generated public uproar, arguing that the President has set a bad precedence.

According to him, the remission is in the right direction, saying no human being is infallible.

‘Jesus thought us how to pray, our father who art in heaven…we all know our brothers words were in bad taste, who has come out to say that we support or agree with what they said, upon my interactions with them when I visited the Nsawam Prisons, I realised that they have regretted their actions. They showed remorse, they have been reformed. One of them confessed to me that he has really reformed and planned to be mindful of what to say in future, our Constitution guarantees freedom of speech; we don’t have to restrict people from speaking if we want to deepen our democracy.

He said it’s an eyesore to be in prison for a month, adding that this is the longest serving contempt case the country has witnessed.

Mr. Ofosu Ampofo stated that Judges are not God and that they can make mistakes, saying the trio have not committed any crime.

‘They were fined a huge money, you went further to sentence them, everybody is saying the judgment was harsh, even a murder case can be reversed by the president, how much more this, the president has been granting amnesty each now and then,’ he asked.

He recalled that a similar case involving the former General Secretary Sir John and Sammy Awuku were not left to rot in jail but were forgiven.

The Director of Elections for the ruling NDC said they are focused on retaining elections by campaigning vigorously across the country.

He refuted claims that the entire trio are NDC members, advising the trio to be mindful of their speeches when they come out.