Repatriated female pilgrims to fly back to Saudi Arabia Tuesday 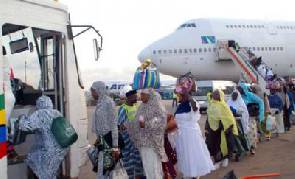 The National Hajj Committee says it is working around the clock to get the repatriated female pilgrims from the Kingdom of Saudi Arabia back to the Arab state on Tuesday morning.

Thirty-Nine (39) female pilgrims from Ghana were repatriated from the Kingdom of Saudi Arabia for various ‘offences’.

Of the 39, nine are minors, while the others, who are less than 40 years, were repatriated for not being without male guardians.

The Kingdom of Saudi Arabia requires that all ladies less than 40 years old be accompanied by an adult male relative.

“Its because of the laws of the Kingdom of Saudi Arabia; they do not expect female pilgrims who are below forty years to enter the country for Hajj purposes unaccompanied so if you are less than 40 years, you need to have a guardian and your guardian could be your husband, brother, cousin, or any family relative but there are times that because of our flight schedules and sometimes the process of acquiring visas, people do not go together with their guardian.’’

The Communications Director of the National Hajj Committee, Alhassan Suhuyini, told Citi News that the committee is however working with the Saudi authorities to fly back the repatriated pilgrims to complete the Islamic rituals.

“We are working with the Saudi Arabian Embassy here in Ghana and the Immigration officials so that they can return with the flight that will be leaving tomorrow [Tuesday] morning,’’ he stated.