Rio 2016: A marriage proposal at the Olympics medal ceremony 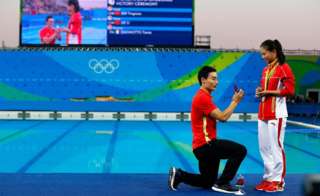 There are dramatic marriage proposals - and then there's proposing during the biggest sporting competition in the world.

Chinese diver He Zi had just received a silver medal for the women's three-metre springboard at the Rio Olympics on Sunday.

But she ended up with another prize when her boyfriend Qin Kai, in front of a global TV audience, went down on one knee.

Luckily for Qin, who himself won bronze in the men's three-metre synchronised springboard last week, He Zi said yes.

"We've been dating for six years, but I didn't expect him to propose today," she said. "He said a lot of things, made a lot of promises, but I think the thing that touched me the most is I think this is the guy I can trust for the rest of my life."

But some viewers have suggested that his shock proposal stole the limelight from her other precious metal, her Olympic medal.

Imagine that you are an Olympic diver and are busy getting a silver medal for this....

When you are approached on the podium by your boyfriend of six years and a bevy of cameramen.

He positions himself on one knee in front and one enterprising cameraman takes up close position behind you.

This is what happened to He Zi, who, when faced with the little red velvet box, is overwhelmed and wipes tears from her eyes.

She covers her face with the hand that is not holding her Olympic medal case, her silver medal glinting.

It lasts just a few moments but Qin Kai appears unable to bear the anticipation...

A little fist pump gives the audience a clue that he may have got his way after all.

He stands up and slides the ring onto her engagement finger.

They embrace and the footage is beamed across the world.

But the gesture has divided audiences. On the BBC's Facebook page, some users say that his proposal upstaged the glory of her medal win, while others say it merely added to her medal tally.

It's one of the biggest trends on China's Twitter-like Weibo service with some calling it "sweet and romantic" but others weighing in with more scepticism: "What a way to add pressure to her, having the entire world watch her as she makes such a private and life-changing decision".