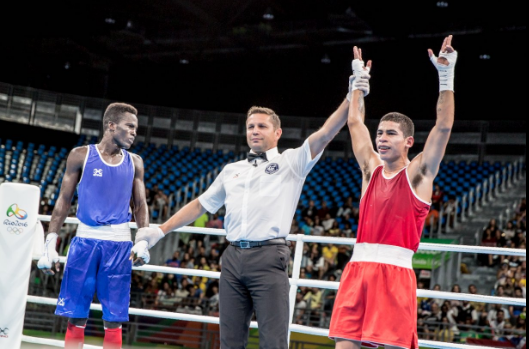 Boxer Abdul Wahid Omar became the fourth Ghanaian to exit the 2016 Olympic Games in the first round after he was edged-out by his Argentine opponent Alberto Ezequiel Melian in the Men's 56 kilogramme bantamweight category on Thursday evening.

Even with the backing of the Brazilian crowd who jeered Melian at every turn, Omar still came up short in the end.The 2014 Commonwealth Games bronze medalist was edged 29-28 by the Argentine on the scorecards of all three judges.

Omar joins the likes of young swimmers Kaya Forson and Abeiku Jackson as well as Hungarian-born judoka who to have lost-out on their debuts.

In a post fight interview, Omar said he believed he won the fight although he came-up against a very experienced opponent.

The games continue today with weightlifter Christian Amoah in action at the Riocentro-Pavilion 2 in the 85 kilogramme category.

Other member of Team Ghana who will take to the track today include sprinters, Sean Safo-Antwi, Flings Owusu-Agyapong and Emmanuel Dasor.