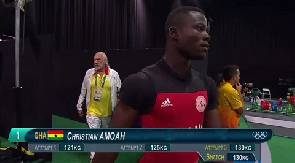 Ghana’s sole representative in weightlifting, Christian Amoah, has failed in his quest to reach the next round of the men 85Kg category as his 157kg Clean & Jerk was declared as a No lift by a five-member Jury.

Amoah’s 157kg Clean & Jerk was unanimously adjudged a GOOD LIFT by the 3 referees but unfortunately, 5 minutes later, the 5 Member Jury overruled the decision, therefore making his previous attempt of 130kg Snatch and 153kg Clean & Jerk to stand which was not enough to grant him qualification.

If that lift had counted, it would have been his seasonal and personal best after his previous best stood at 155kg

According to the revised rules, the Jury’s decision cannot be challenged.

Elsewhere Ghana’s Alex Amankwah could not progress to the latter stages of the men’s 800m event after he finished 7th in the heats.