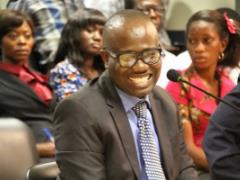 Ghana FA boss Kwesi Nyantakyi became the second Ghanaian in 40-years to secure a seat on the FIFA Executive Council on Thursday to underline his growing stature in world football.

the Confederation of African Football on the powerful council.

Nyantakyi's recent elevation underpins the pendulum life long story of a man who is destined to remain at the apex of world football for many years.

His rise to stardom is nothing short of miracles after traversing long and winding 'politics' of Ghana football to emerge the commander-in-chief for the past 11-years.

The high-flying Ghana FA chief, who is the owner of newly-crowned Ghana Premier League champions Wa All Stars, is hugely unassuming and rose through the ranks at the Ghana League Clubs Association (GHALCA).

By some dint of destiny, he became the vice-president of the Ghana Football Association, eventually taking over the mantle from Dr Nyaho Tamakloe.

Nyantakyi has not looked back since he assumed the role in a substantive capacity, chalking decent successes during his reign so far.

The ever-smiling and affable lawyer put the West Africans on the global map after leading his country to three successive World Cup appearances in Germany, South Africa and Brazil.

Ghana won Africa's first ever FIFA Under-20 World Youth title under his belt and the women's football teams have qualified for all World Cups under his watch.

Nyantakyi's position as CAF Executive Committee member has helped to catapult several compatriots to work on many sub-committees.

He has also mediated in the football crisis in Sierra Leone that threatened to cripple the game in that country.

The Ghanaian FA leader has also commercialized the local league with the current economic downturn accounting largely for the federation's inability to secure sponsorship for the top-flight last season.

His latest achievement adds to the endless stock of qualities that have endeared him to the top echelon of the continent's governing class.

He boasts of several eye-catching qualities including humility, openness and a born or natural leader which keeps him at the apex of African football.

The CAF Executive Committee member is also a team player, makes people to believe in him and open to modern trends.

Despite several attempts to pin him down in his native country by a tiny minority of the media, Nyantakyi keeps soaring high with his infectious smile and top leadership qualities.

Nyantakyi, one of the finest Ghanaian football administrators of this or any generation, has  finally gotten his crack at the world stage big time.