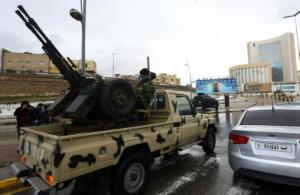 A rival Libyan administration on Wednesday accused forces allied with the country's unity government of carrying out an air strike that killed seven civilians.

Women and children were among those killed in the raid on Tuesday in Sokna, 480 kilometres (300 miles) southeast of Tripoli, the parallel administration said in a statement on its website.

The strike was carried out by "aircraft that took off from an air base in Misrata belonging to illegal militias and terrorist groups allied with them," it said, referring to forces loyal to the UN-backed unity government.

A spokesman for the base called the accusations "wrong and biased", according to a Facebook page run by the unity government.

"Flights (on Tuesday) did not reach those areas, but were only reconnaissance flights in the coastal area," said Lieutenant Colonel Mohammad Qanunu.

It was not immediately possible to contact independent witnesses in Sokna.

UN envoy Martin Kobler wrote on Twitter that he was "shocked" by reports of air strikes in the area that killed "many civilians, among them women and children."

"Civilian casualties are unacceptable," he said.

Sokna lies in Al-Jufra district, 200 kilometres (125 miles) south of Sirte, where forces allied with the Government of National Accord (GNA) are battling Islamic State group (IS) jihadists.

GNA forces based in nearby Misrata often carry out reconnaissance flights south of Sirte to intercept IS fighters fleeing into the desert. 
The GNA was formed following a UN-backed deal in December 2015, but it has struggled to impose its power across a country riven by violence since the fall of dictator Moamer Kadhafi in 2011.

The GNA, created last year as a UN-brokered power-sharing government, still needs a vote of confidence from the parliament based in the east.

The parliament has so far withheld its support, instead backing the rival administration, which is also based in the country's east.

Both governments depend on militias for their authority, and the parallel authority is backed by military strongman Khalifa Haftar.

Last week Haftar's forces seized four key export terminals in Libya's coastal "oil crescent", in a further blow to the GNA's efforts to extend its writ across the whole country.

Meanwhile, GNA forces have been fighting for more than four months to oust IS from Sirte, Kadhafi's coastal home town.

Suicide bombings and sniper fire from the cornered jihadists have slowed the offensive.

More than 450 members of the loyalist forces have been killed and around 2,500 wounded since the operation began in May.