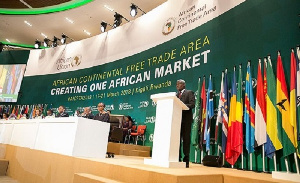 Rwanda tops the ranking for countries most committed to the implementation of the African Continental Free Trade Area (AfCFTA) scoring 83.93 per cent on the commitment scale; with Ghana placing fifth, recording 71.23 per cent, according to the “AfCFTA Year Zero,” report.

The report said assessment of African governments’ commitment and readiness for the Continental Free Trade Area agreement was produced by AfroChampions, a leading private sector partner of the African Union in partnership with Konfidants, a research and advisory firm.

The assessment was completed before the advent of the Coronavirus pandemic, which now threatens to derail the trading agreement but at the same time presenting a platform for the continent to press ahead and use the AfCFTA as a weapon to beat COVID-19 and speed up post-pandemic recovery.

Bottom down countries according to the report on commitment scale are Sudan, Zambia, Tunisia, Nigeria, Botswana, Morocco, Algeria, Burundi, Libya with the least committed country being Eritrea with a score of 0.85 per cent.

The report pegged the overall average commitment level of the continent to AfCFTA at 44.48 per cent; and its overall implementation readiness level at 49.15 per cent.

Some of the most committed countries (such as Ghana, Mali, Togo and Uganda) are not necessarily the most prepared in terms of trade infrastructure, customs efficiency and access to credit for industry.

Conversely, some of the least committed countries (such as Botswana, Namibia and Tanzania) performed very strongly in terms of implementation readiness.

The report said Ghana placed sixth with a total overall score of 62.47 per cent in an AfCFTA ranking based on overall performance (combined ranking of both commitment and readiness) in a pack topped by Rwanda with 74.26 per cent.

The assessment was based on commitment to the free trade agreement/treaty (Signing and ratification of AfCFTA and a publicly national AfCFTA implementation strategy), commitment to free movement (Signing and ratification of Protocol on Free Movement of people and country’s Visa Openness), trade facilitation readiness (quality of trade-Infrastructure and efficiency of Customs) and access to credit (Ease of Getting Credit and Cost of Credit).

The rankings by AfroChampions sought to answer two questions: which countries are the most committed to the AfCFTA process and which countries have the best implementation readiness in terms of trade infrastructure, customs efficiency and access to credit.

It recommended that the low level of readiness and the COVID-19 health emergency should spur the continent on to maintain the July 1, date for commencement of trade, adding countries would only accelerate their readiness when trading actually took off.

It identified almost half of the continent were yet to ratify the AfCFTA with virtually all countries lagging behind in the completion of national AfCFTA Implementation strategies.

The report said there was mismatch between countries’ enthusiasm for the free trade area and cold feet towards free movement indicating that that could spell doom for the agreement.

It also noted poor trade facilitation readiness of countries as a threat for the concept with access to credit and identifying the prospects being better than the reality.