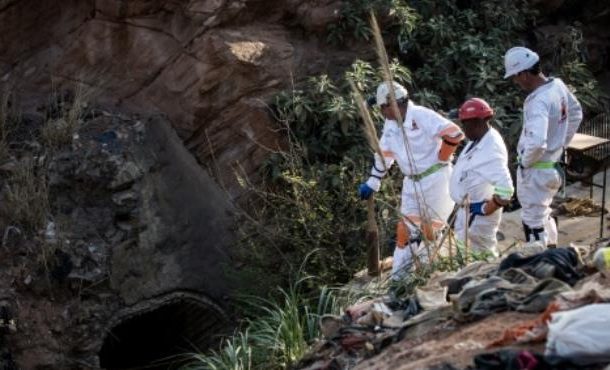 A fire broke out on Sunday inside a shaft at the disused Langlaagte mine in Johannesburg, where a group of unauthorised diggers have been stuck for five days.

"The fire has to be stopped, and after that we will get a briefing whether it is safe to commence," said Mineral Resources Minister Mosebenzi Zwane.

It was unclear how many diggers were trapped underground. Survivors who have come out have told rescuers there were about 16 still there. Others are believed to have died.

"We are assessing the conditions, and should they get better, we would resume and bring those bodies up to the surface," Zwane told journalists.

The Langlaagte mine is where gold was first discovered in Johannesburg in 1886.

Mining operation at the site ceased many years ago, and the pit was declared a national monument in 1989.

Like many old mines around the Johannesburg gold reef, the pit has been a target for illegal mining, where impoverished men dig for nuggets which they sell on the black market.

Zwane said his department had sealed off 200 holes in disused mines around Johannesburg in a bid to curb illegal mining.

"One of our biggest tasks is to get to the syndicates behind these operations, as well as the markets they're supplying," Zwane said.

Police said seven miners have surfaced from the Langlaagte pit since Sunday.

"Those who come up get arrested. This is an illegal activity," said police spokesman Kay Makhubela.

Gold mining was for many decades the backbone of South Africa's economy, but production has over the last few years declined due to depletion of reserves.