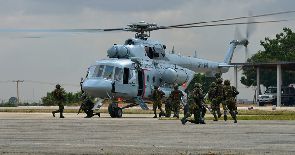 The 501 army recruits who were dismissed by the Ghana Armed Forces in 2015 are free to decide wherever they want to go, but the military will not reinstate them, Public Affairs Director of the GAF, Lt Col Eric Aggrey-Quashie, has said.

In an interview with Adom FM, the convener of the dismissed recruits, Frank Antwi, indicated that the training they had before their dismissal from the military could be of use to any militant group and warned that some of the disappointed recruits would not hesitate to join the ranks of terrorist organisations such as ISIS and Boko Haram should the need arise.

He pleaded for the military command to reinstate them to prevent any such outcome which could be a potential security threat to the nation.

However, Lt Col Aggrey-Quashie, who spoke to ClassFMonline.com on Wednesday October 12 said: “Everybody has the right to do what he wants with his life and, so, if this is what you want to use your life for, I will leave it to them and their families. If they think that is the best thing that their siblings or wards can undertake, then that is fine for them.”

“As for the Armed Forces, we do not have anything to do with them anymore because they did something that went against our regulations, for which reason their training was stopped. Once that is done, you cannot continue with us.”

For him, the military “is built on discipline” and so that discipline will have to be maintained at all times.

The recruits, who were undergoing training at the Army Recruits Training School at Shai Hills, were dismissed for misconduct last year.