Sad: Asante Kotoko in a tragedy

The team bus of Kumasi Asante Kotoko was involved in an accident with a KIA truck on Wednesday night, en route to Kumasi after they lost their midweek game against Inter Allies in Accra.

The accident happened along Nkawkaw the capital of Kwahu West Municipal District, in the Eastern Region.

The club's Kit manager, Mr Asare was reported dead at the spot and the rest of the team officials and several players were transferred from the Holy family hospital to be treated at the Komfo Anokye teaching hospital in Kumasi for major injuries with few minor injuries. 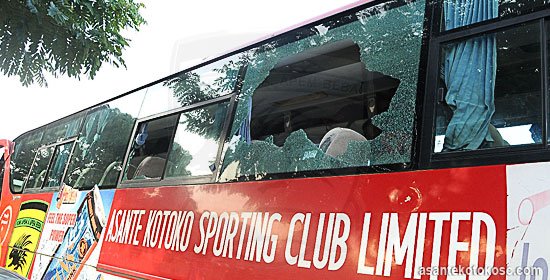 "A Kia Rhino was recklessly parked with goods on the road without any triangle road sign in the night, the bus was in a top speed in the direction of the KIA and the driver could not control the break and crashed into the KIA, leaving it completely flattened. 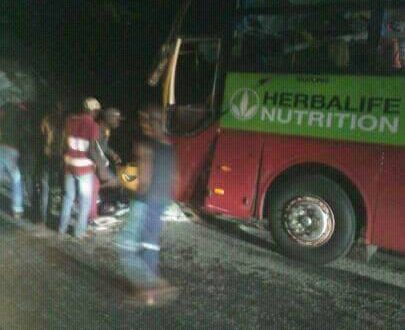 "We were in a saloon car infront of the bus, it was a scary moment but we managed to get them out of the bus, only the Kits manager died at the spot". team security and eye witness, Habib told Ghanaguardian.com.

The Porcupine Warriors now fourth of the Ghanaian top flight and Sunday's super Clash against arch rivals Hearts of Oak has been postponed indefinitely by the PLB.

As the Ghana premier league teams financial problems have worsened, clubs have been forced to cut their travel expenses, making hazardous road journeys unavoidable for most clubs.

Staying at a hotel overnight in order to travel the following morning is also an expense few clubs can not afford.

Last year, Kpando Hearts of lions players were involved in fatal accident on the club's entourage as they travelled for a division one league game against King Solomon.