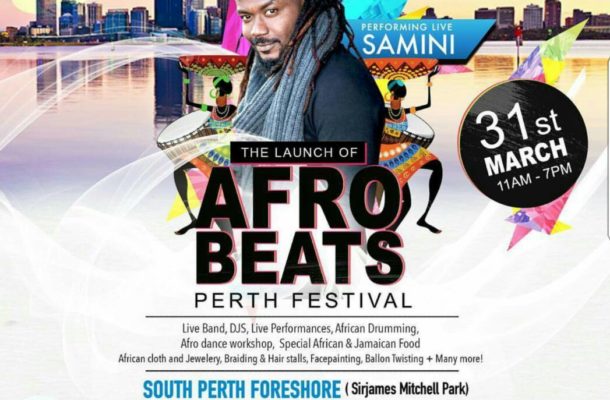 Saturday March 31st is set to be a long Easter weekend with excitement as Emmanuel Andrews Samini, known by his stage name Samini, is poised on his mission to put Ghana Music on the map like he’s done throughout his 14 year long music career.

The world is yet to have more from the Ghanaian music legend as he is set to headline the first ever Afrobeats Perth Festival in Australia.

Samini has gradually warmed himself into the elite of Ghanaian musicians with his world-appeal.

The festival, a birth-child of Perfect Promotions AUS is scheduled to be a showcase to celebrate the best in Afrobeats music and dance as a showcase to the world. Expected attendance is estimated at Fifty Thousand in capacity and patronage.


Samini started singing in a church choir at the age of 14, and became a professional musician after a musical collaboration with another musician in 1999.

His debut studio album, Dankwasere, was released in 2004; it topped the local music charts for weeks and won two awards at the Ghana Music Awards.

He collaborated with Steel Pulse and Etana from Jamaica. He has received international recognition and toured the UK, Germany, Italy, Canada, and the Netherlands.

He received international recognition when he won the "Best African Act" at the 2006 MOBO Awards.

In February 2008, Samini won the "African Artiste of the Year" award at The Headies.

His third studio album, Dagaati, was released in 2008.