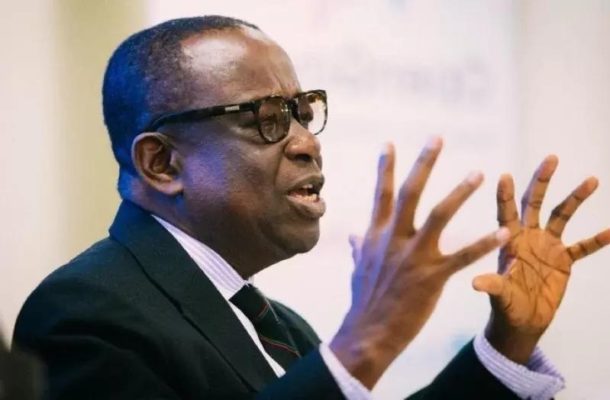 Albert Kan-Dapaah is the Minister of National Security

I am angry at the weak defence of the conduct of the Minister for National Security and a clear case of self-preservation by the same persons. Even more disgusting is the name-calling, body shaming of the alleged lady. Essentially, we are back at misogyny over accountability.

It’s worrying and betrays one’s understanding of politics and governance; when you find others resort to emotional blackmail (the usual phrases; no one is perfect, we are all the same, don't be a hypocrite) instead of condemnation, introspection and honest assessment of the impact of such conduct on governance.

It’s baffling, how after watching the alleged video involving supposedly the National security minister and one only sees MORALITY and misses vulnerability/lapses in security in the hands of those entrusted with our collective interest.

Why do you think some persons enjoy privileges over you and I? Why do you think you and I are not ministers or in charge of national resources? We are not the same, we cannot be the same and not subject to the same responsibilities and accountabilities. To whom much is given, much is required.

Why do you even worry about corruption for instance? Think about it. It is because persons in positions of trust are held to a higher standard than ordinary citizens. It is because we all have put our faith, trust, security and resources into their hands. They cannot be seen or engage in conduct that has the potential to undermine such confidence, trust and collective security.

I care what such persons do in private as much as in public. So should you. They are entitled to privacy but a limited privacy, case law abounds on this matter. What public officials do in private, is a matter of concern for the governed if it will affect our interest or has the potential to undermine our interest or may involve the use of state resources or will cause an official to engage in corruption to support such private affairs. For example, travelling with say your girlfriend on an official assignment using taxpayers money directly or indirectly.

I may not care about what NAM 1 for instance or any other rich or poor guy does in private unless it has a bearing on national security or public interest. That is the difference in this case.

What the minister is alleged to have done in that video clearly has less to do with morality than a sense of judgment. The video shows how unguarded a man we have put in a sensitive position is or can be, and the likelihood of jeopardizing our collective interest or security.

That is what I see and not those feeble arguments about who recorded it, why was it leaked, sabotage and so on. If it was sabotage, it’s even more serious. It means they GOT the man responsible for our safety. That is more worrying.

It is not a commutable new to know that security capos use unencrypted video chat lines etc? Just from the video, one can detect at least four (4) vulnerability points in our security chief’s cyber setup. It is unsophisticated.

Why should a National Security Minister tell his alleged girlfriend about a meeting on security he is attending?

Security and intelligence thrive on secrecy and therefore, the meetings you even attend ought to be kept within the circle of those who must know.

You are entitled to have your secret lovers. But, when it becomes public, it is a matter of public concern because you are a public official.

And this is not just for the national security minister but all persons put in positions of trust. The privileges are not so you can expand the frolic of your immorality but so you can execute your job to the best of your ability. If it has to be abused, utmost discretion is required.

We will hold you to a higher standard than Sammy Darko.
Sammy Darko is not morally fit to judge anyone but he is fit to hold people in higher public offices to account on both their public and private affairs that have direct and indirect bearings on our collective interest. This would certainly not have been any news should it have been Kwame Ntiamoah or Adwoa Boateng. It is only news because it involves a person in a higher office.

That is the difference really!

NB: I have become aware that this was an( internal job) but the bottom line is that 'they'got him still because of the lack of judgment.