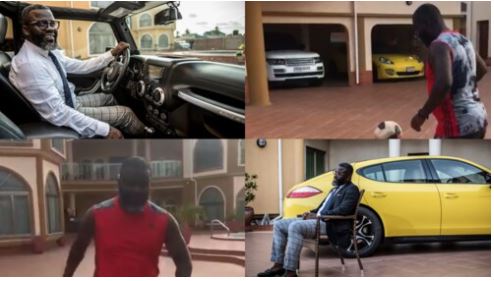 Former Black Stars and Bayern Munich defender has given a word of counsel to footballers who are still active to surround themselves with persons who can help them plan for their future and not persons who will squander their money.

Most footballers get a lot of money during their playing days but end up as paupers when they retire.

According to the former Bayern Munich icon footballers must realize that they will retire at some point in time and must therefore save for their future and retirement by investing their monies soundly.

According to Samuel Osei Kuffour, former Black Stars striker Anthony Yeboah and Osei Kwame Despite and Dr Ofori Sarpong are some friends who helped him in making safe and sound investments for his future.

In an interview with Joy Sports Link on Saturday, Kuffour revealed experienced persons in life like the persons mentioned helped him a lot and is advising current players to do same.

“Someday you would be receiving 100,000 a week. Someday you won’t be playing anymore. Why don’t you find yourself someone with a business IQ to help you use your money well.”

The Bayern Munich legend also extended some gratitude to Tony Yeboah for the help he gave him.

“I have to thank Tony Yeboah for his advice. The first house I bought was at Reg Emmanuel estates. I bought the house with Tony Yeboah. It showed me that he cared a lot for me.”

"And also Despite and his brother Dr Ofori Sarpong, mostly after big games and big wins he will call me and say Sammy we have seen you just won this game we have a property for you come and buy and I will oblige" he added.