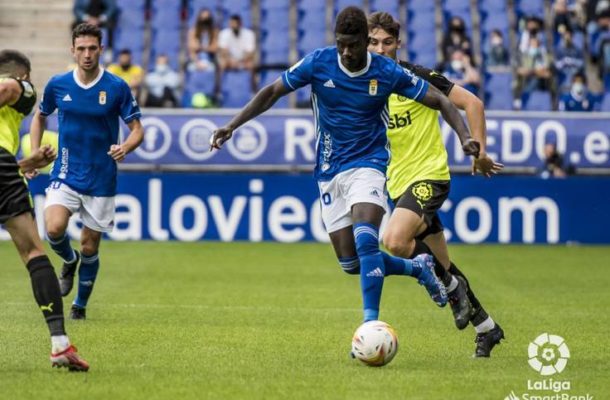 Spanish side Real Oviedo has renew the contract of Ghanaian striker  Samuel Obeng until 2024.

The striker, whose contract ended in 2023, has extended his relationship with the entity for one more season.

Last season he participated in 35 games being the team's second top scorer, only surpassed by Borja Bastón who scored 22 goals.

Obeng scored eight goals, thus achieving his best records after the three scored in his first season as a professional player for the club.

In the recent season that has just ended, he played 28 games as a starter, although only two of them were complete, compared to the fifteen he played from the beginning of the previous season, of which he only played 90 minutes in four of them.

Although he did not belong to the first team until the 20/21 campaign, his debut with the elastic Carbayona came in 2019 with Anquela on the bench.

In the said match, Oviedo lost 3-2 to Deportivo de la Coruña, but the Ghanaian scored a great headed goal.

Finally, that same season, already with Ziganda as coach, he ended up being a key player, achieving the goal that gave the Blues safety in the penultimate matchday of the league against Racing de Santander.