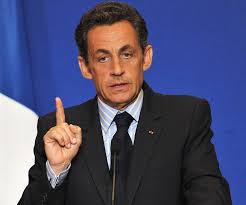 Nicolas Sarkozy said he is seeking to re-take the French presidency, officially declaring himself a candidate in the Republican party’s primaries.

“I’ve decided to be a candidate for the 2017 presidential election,” Sarkozy said on Twitter. “The coming five years will be full of danger but also full of hope.”

The Republicans hold their primaries in two rounds on Nov. 20 and 27 in a vote being contested by more than a dozen politicians. The winner of that battle will go on to confront a candidate from President Francois Hollande’s Socialist Party as well as the National Front’s Marine Le Pen in a general election slated for April 23 and May 7 next year.

Sarkozy has been widely seen as preparing a bid since emerging from retirement to return to active politics in late 2014.