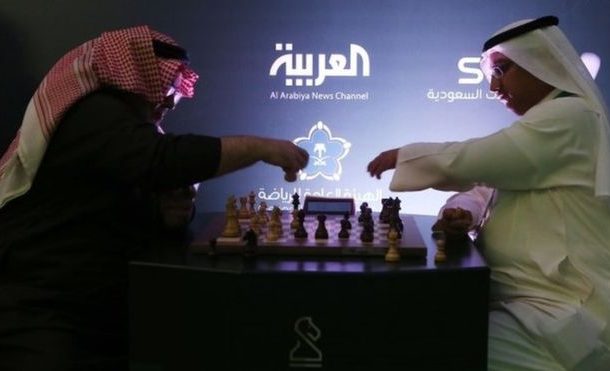 An international chess tournament is starting in Saudi Arabia amid controversy after Israeli players were denied visas.
A Saudi official said visas could not be granted because the kingdom had no diplomatic ties with Israel.

The Israeli Chess Federation said it would seek financial compensation.

The hosting of this first major chess tournament is being seen as part of Saudi Arabia's process of opening itself more to the outside world.

But a double world champion has said she will boycott the tournament because she does not want to wear an abaya, the full-length, loose-fitting robes women are required to wear in public in Saudi Arabia.

Anna Muzychuk, 27, who plays for Ukraine, said that "despite the record prize fund, I am not going to play in Riyadh" even if that meant losing her two world championship titles.

"To risk your life to wear abaya all the time?? Everything has its limits and headscarves in Iran was more than enough," she wrote on Facebook referring to the world championships held in the Iranian capital, Tehran, earlier this year.

The World Chess Federation announced in November that the tournament's organisers had agreed there would be "no need for female players to wear a hijab or abaya during the games".

The federation said this was "a first for any sporting event in Saudi Arabia".

But Ms Muzychuk said in another post, published on 23 December, that despite feeling bitter about standing to lose her titles, she would stand by her principles and skip the championship.

Her protest comes at a time of increased attention on restrictive women's rights in Saudi Arabia.

While a ban on women driving will be lifted from the middle of next year, activists say the strictly conservative Islamic kingdom has a long way to go to improve gender equality and human rights.

To organize a chess tournament in a country where basic human rights aren't valued is horrible. Chess is a game where all different sorts of people can come together, not a game in which people are divided because of their religion or country of origin.http://www.fide.com/component/content/article/1-fide-news/10496-world-rapid-and-blitz-announcement.html …

">https://twitter.com/GMHikaru/status/928668423592259584" class="off-screen" tabindex="-1">End of Twitter post by @GMHikaru— (@GMHikaru) End of Twitter post by @GMHikaru">
While seven players from Israel are set to miss the tournament after the Saudi authorities did not issue them with visas, players from Qatar and Iran will be able to attend after they were given visas at the last minute, despite their countries' strained ties with the kingdom.

The Israeli chess body said it was led to believe its players would be allowed to attend, despite the two countries not having diplomatic relations.

It has accused Saudi Arabia of misleading the World Chess Federation so that it would be selected to host the tournament.