Save us from retrogression- Yagbon-Wura appeals to NPP leader 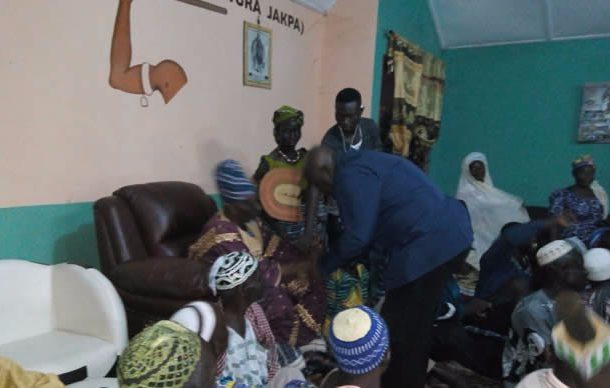 The Overlord of the Gonjaland in the Northern Region, Yagbon-Wura Tuntumba Boresa II has called on the flagbearer of the New Patriotic Party Nana Akufo-Addo to save his people from retrogression when he wins power.

The chief through his linguist told the NPP leader that things have become difficult for his people in the past few years and cannot get any worse.

You said you will move Gonja forward, we use to be better but now we are backwards. So if you say you will move us forward then [the] chiefs offer you a warm embrace, the Yagbon-Wura said.

He added that even though president Mahama constructed roads for the people in the area which they appreciate, they do not have potable water.

The town, with a population of about 11, 258 according to the 2010 population census depends on four mechanized boreholes with the Akpeteshie dam serving the larger community.

Majority of the residents depend on the Akpeteshie dam as their source of water since the Ghana Water Company Limited stop producing water in 2003.

Since then the residents have had to suffer during the dry season which spans from October to May each year because of the shortage of water.

Minister of Water Resources Dr Kwaku Agyemang-Mensah, visited the area last year and promised that government was looking for funding to work on the project but nothing has since been done.

The Yagbon Wura in desperate need of water for his people appealed to the NPP leader and his campaign team that in the event he wins the elections he should not forget about them.

He said both the president and the NPP flagbearer are his sons and will pray for them, adding the one with good intentions for Ghana and gonjaland will win the December polls.

Yagbon-Wura Tuntumba Boresa invoked the gods of the area for Nana Addo as he continues his campaign. He appealed to the NPP leader to conduct his campaign devoid of insults.

Nana Addo on his part appealed to the overlord of the area and his people to support him in the December polls.

He said even though he is not a Gonja, the people must rally behind him for victory.

The NPP flagbearer also paid a courtesy call on the Yapia wura, Suale Alhassan to seek his blessing for the December polls.

The chief predicted victory for the NPP leader and went ahead to make his requests in the hope that Nana Akufo-Addo will fulfil those requests after the elections.

The Yapia Wura also demanded the provision of potable water, a new district and a Senior High School if the NPP leader wins the polls.

Nana Addo on his part said it was disheartening that Ghanaians lacked the basic necessities of life after 58 years of independence. He said the NPP government, will through its flagship programme, the infrastructure against poverty eradication, resolve issues like water and other basic amenities in the area.

The NPP leader also visited the bole chief where he highlighted some of the development programme the NPP will undertake if voted into power. He appealed for support to enable him win the polls.

The party then held rallies at Yapie, Bole fulfuso among other communities.