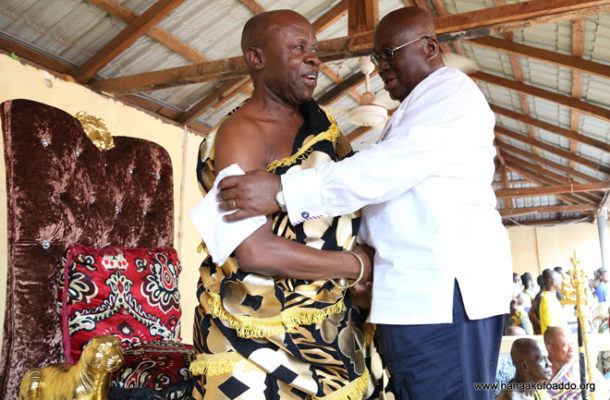 Ogyeahorhuor Kwaku Gyebi II, the Chief of the Anhwiaso Traditional Area, in the Bibiani Anhwiaso constituency, in the Western Region, has endorsed the “1-District-1-Factory” policy of the 2016 presidential nominee of the New Patriotic Party, Nana Addo Dankwa Akufo-Addo.

According to the Chief, the policy was one sure way of creating the hundreds of thousands of jobs required by the teeming masses of unemployed Ghanaian youth across the country.

“We have heard you say that in every district your government will help establish one factory. As usual, we have heard the naysayers and doubters saying it cannot be done. I am not a politician, but I vividly recollect that our grandmothers used to make soap out of plantain husks and cocoa pods.

“Even if Nana Akufo-Addo does not build a cocoa processing factory here in Anhwiaso, but says he will set up a soap making factory, for example, it is clearly doable. The ‘1-District-1-Factory’ policy is one I wholly endorse. We, in Anhwaiso, know that once you have said you will do it, it will be done,” he said.

Ogyeahorhuor Kwaku Gyebi II made this known when Nana Akufo-Addo, in the company of NPP national and regional stalwarts, paid a courtesy call on him at his palace, at the commencement of a five-day tour of the Western Region.

Bemoaning the high levels of unemployment in Anhwiaso and in the country, with tertiary institutions, according to the Anhwiaso Chief, producing some 60,000 to 80,000 graduates annually, Ogyeahorhuor Kwaku Gyebi II wondered how many of such graduates will get jobs to do if drastic policy measures, like the ‘1-District-1-Factory’, are not implemented.

“That is why some of us have expressed our confidence and belief in you. As you (Nana Akufo-Addo) have said, once agriculture is diversified, and factories established, thousands of jobs will be created across the country,” he added.

The Anhwiaso Chief also bemoaned the falling standards of education under President Mahama's government, with particular reference to the recently published results of candidates who sat in this year’s West Africa Senior Secondary Examination.

Saddened by the results, which saw only 53 per cent of students recording passes in English; 48.5 per cent passes in Integrated Science; and 32.8 per cent passes in Core Mathematics, the Chief wondered “if these are the kinds of results being churned out as a nation, how then can we develop?”

To this end, he urged the NPP flagbearer to take a second look at the duration students spend in school, and reverse it to the 4-years originally introduced by President Kufuor. He, however, stated that if the 3-year duration will be maintained, then all senior high schools must be fitted with the requisite learning facilities to help improve the grades of students.

Ogyeahorhuor Kwaku Gyebi II was confident that, under Akufo-Addo government, “the Free SHS policy will be truly implemented”.

To this end, he appealed to the NPP flagbearer to come to the aid of the Anhwiaso Senior High School, a project he undertook on his own.

“Government, in the last two years, has taken over the school. However, till date the students have nowhere to lay their head. On our own, again, we have started the construction of a dormitory and a science laboratory. Kindly assist us finish this school when you win,” the Chief appealed

On the deplorable nature of the town roads in Anhwiaso, which the Chief said had been the subject of several petitions to government, he was confident that “when Nana wins the elections, he will make sure this is done”.