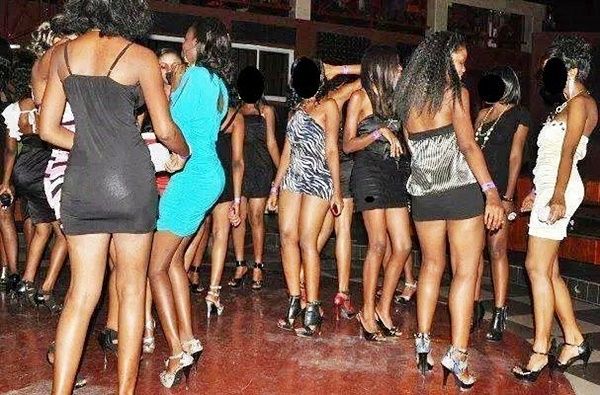 The fact-finding exercise was to give the security team insight into the illicit activities in the facilities.

The MCE for New Juaben South Isaac Appaw-Gyasi who is the chairman of the Municipal Security Council(MUSEC) ordered the owners of the facilities to report themselves to MUSEC today Friday, June 30, 2022, with Operation permit and other documents if any.

Meanwhile, some suspects were caught red-handed at “Rumour facility” preparing large quantities of dried leaves suspected to be Indian herm for their clients.

They were immediately arrested and detained at the Central Police station to be processed to Court.

The action of the security follows Starr News investigation which uncovered young female Nigerians including minors are being trafficked to Koforidua, Eastern Regional capital -Ghana for sexual exploitation through the conspiracy of some Ghanaians and Nigerians under the pretext of securing decent and well-paying jobs for them in Ghana however forced into prostitution upon arrival.

The Bula Spot and Little Ben area are two major notorious brothels being used by the traffickers to house their victims in Koforidua.

Meanwhile, a delegation from the Nigerian High Commission in Ghana have been in Koforidua to meet the Eastern Regional Police Command and the leadership of the Nigeria Association in the region on the matter.

The team met the good Samaritan, Ibrahim Amevor, who rescued one of the sex traffickers who was impregnated, infected with HIV and thrown out of the brothel.

The victim who is suffering from psychosis delivered in April 30, 2022.

The Nigeria High Commission has initiated processes to facilitate her repatriation.