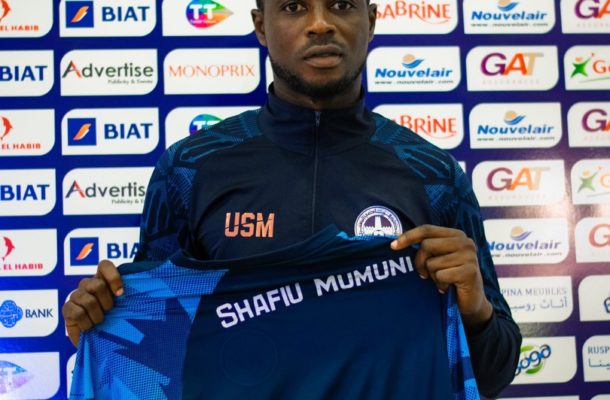 Shafiu Mumuni when he signed for US Monastir

Former captain of Obuasi Ashantigold Shafiu Mumuni is edging closer to a move to Algerian side ES Setif on a free transfer after his release from Tunisian side US Monastir.

The Tunisians mutually terminated the contract with the striker on Friday after a four month stay at the club.

Reasons for his contract termination remains scanty but it appears his Tunisian side were not too  happy with his output four months into his two year contract.

Mumuni is believed to have signed for ES Setif as a replacement for their striker Anthony Okpotu who has departed the club.

The former Black Stars B captain scored once with his only goal coming in December 2020 in his side's 2-0 win over Al Ahli Tripoli in the CAF Confederation Cup preliminary round qualifier.

Shafiu Mumuni came to prominence in 2019 when he finished as the top scorer at the 2019 WAFU Cup of Nations in Senegal with four goals.