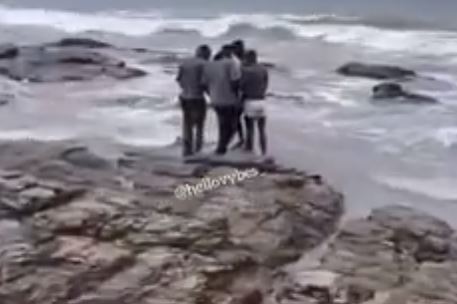 Musicians Shatta Wale, Medikal, and the three others who were granted bail by an Accra Circuit Court on Tuesday visited a beach in Accra to cleanse themselves with seawater and subsequently pray.

The purpose of the activity was unclear.

However, earlier media reports alleged that it was a “spiritual” bath to cleanse themselves of any bad omen that may be following them after spending time in prison.

Shatta Wale was on Tuesday, October 19 arrested together with Kojo Owusu Koranteng known as Nana Dhope, Idris Yusif (Deportee); and Eric Venator (Gangee) for faking that Shatta was gunned down by unknown assailants.

Medikal on the other hand was arrested on Thursday, October 21 for brandishing a gun on social media.

They were subsequently remanded into Ankaful prison for a week for Shatta and his crew while Medikal also went in for five days. But they were all granted bail on Tuesday, October 26.

From the prison, they decided to go to the beach to perform their prayers and then bath.

Videos of them bathing at the beach were widely circulated on various social media platforms on Tuesday evening.