She wants women to have good sex. So she started a website... 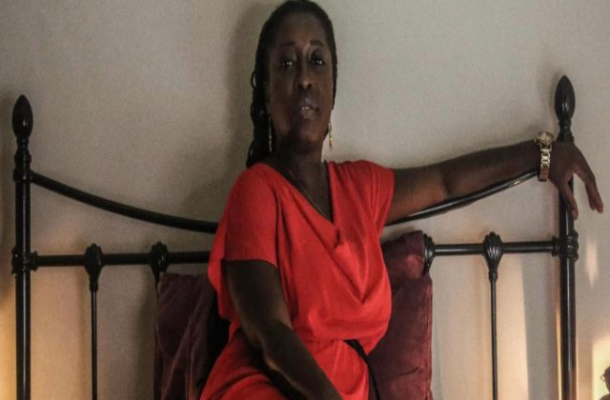 "What are your sex and relationship goals for 2019?"

That was the question put to women in a blog post published earlier this year in a country that is deeply religious.

"I want to give myself the opportunity to feel like a woman and not just someone's mother," one reader, Laquo, responded in a blog post.

It's the kind of response that would surely please Nana Darkoa Sekyiamah, the Ghanaian writer who posted the call-out on Adventures from the Bedrooms of African Women, the blog she started 10 years ago with a friend, Malaka Grant.

Sekyiamah's interest in sex is less about being salacious (though it's hard not to blush when reading some of the posts on the site) and more about health, empowerment and community.

Sekyiamah's office at her home in Accra.

In the East Legon neighborhood of Ghana's seaside capital, Sekyiamah's spacious bungalow sits between much grander properties. Surrounded by family photos, art and literature, she runs her website and works as director of communications for the Association for Women's Rights in Development, an organization that supports feminist movements worldwide.

Sitting down with freshly made smoothies, Sekyiamah, who is in her early 40s, explains that it took her until the age of 30 to feel safe speaking about sex and sexuality with other women.

A vacation a decade ago with five other women -- where the conversation kept coming back to sex -- prompted Sekyiamah to set up Adventures, as she refers to the blog. Its goal is clear, to provide "a safe space where African women can openly discuss a variety of sex and sexuality issues."

Sex isn't hidden from view in Accra. It's everywhere. But it mostly plays to men's desires and insecurities.

In one ad, the man depicted takes herbal medication, returns to peak performance and when asked by his wife what he'd like for dinner, he replies hungrily: "You of course!"

Some of the country's languages and traditions, however, reveal an older, more generous understanding of sex and sexuality. The word supi, for example, refers to an intimate friendship between two girls, which may or may not be sexual. While women from Ghana's largest ethnic group, the Akan, are said to have grounds for divorce if they are not sexually satisfied by their husband.

There are also many programs run by the government and international charities that focus on sexual and reproductive health, but according to Sekyiamah, those programs tend to ignore pleasure.

"Within the international development discourse, whenever African women's sexual and reproductive health is mentioned, they are spoken about as vectors of disease, or the conversation is about needing to control the fertility of African women," she says.

"This discourse leaves out so much, specifically, the importance of African women controlling their own bodies. Pleasure is connected to well-being and so comprehensive sex education is essential to a woman's full development. If you don't have control over your body, what can you really have control over?"

Kobby Ankomah-Graham has been part of the Adventures community since the blog launched, and he has spoken on discussion panels alongside Sekyiamah, focusing on the role of men and boys.

Born to Ghanaian parents and raised partly in the UK but settled in Ghana, Ankomah-Graham lectures at the Accra campus of American higher education institution, Webster University. He's also written about how much gender roles are changing and how young Ghanaian men seem unprepared for a new, more equal reality.

Kobby Ankomah-Graham shares an intimate moment with his partner, Shari, and their young child.

"When you're privileged and that privilege is taken away, you count that (as) oppression," he says.

"Boys feel hard done by gender equality. Divorce rates are rising in Ghana and one of the reasons is the intransigence of men."

Ankomah-Graham draws on his own personal experience to act as a role model, or at least a conversation starter.

"I have a father who has had an interesting life when it comes to women: 12 kids, eight women and four wives. But I'm also the child of a women's rights activist (anti-female genital mutilation campaigner Efua Dorkenoo OBE)," he says.

"I definitely identify as a feminist so boys can see this as possible. I try to explain to them that we have such a long way to go, that they should be thinking about the fact that they are going to compete with women in the working world. They need to be ready for that in ways their fathers weren't."

Maame Akua Kyerewaa Marfo is the kind of woman Ankomah-Graham is preparing his male students to meet.

"I'm seen as this feminist loud-mouth but I have the most boring sex life," she says with a laugh. "I'm a virgin."

"It's not for religious reasons," Marfo adds quickly.