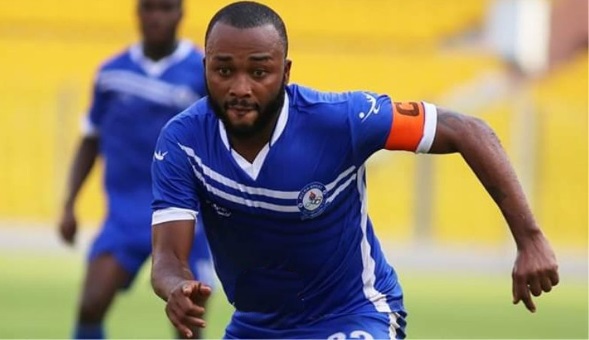 The former Ghana youth international has confirmed that contract negotiations are currently ongoing between his camp and the Wonder club but remained tight-lipped on how far they’ve reached.

Speaking in an interview with Graphic Sports in Accra, Awako disclosed that he was looking forward to return to action with Olympics and looks forward to an imminent agreement for his contract extension.

“I am in talks with Olympics to extend my contract but nothing is concrete yet,” he said.

“We will know what happens when we finalise the agreement.

“I can’t promise anything yet but Olympics is one of the biggest clubs in the country and I’m ready to play for them in the upcoming season,” the experienced midfielder added.

Awako returned to Ghana from US to sign a one year deal with Olympics having spent the 2017-2018 season with Phoenix Rising FC.

The 29-year-old spent five seasons with Congolese giants TP Mazembe where he achieved much success both domestically and continentally.

When asked about his decision to return home, the former U-20 World Cup winner said he joined Olymmpics to contribute to the growth of the GPL.

He called on Ghanaian players abroad to emulate Brazilians by coming back home to contribute to the betterment of the league by making it attractive.

“It is good to always to play where you are loved and I feel appreciated back home. My decision to come here was to contribute to the growth and excitement of the league.

“I want to call on foreign-based players to return back home to play for Ghanaian clubs at certain stages of their careers,” Awako said.