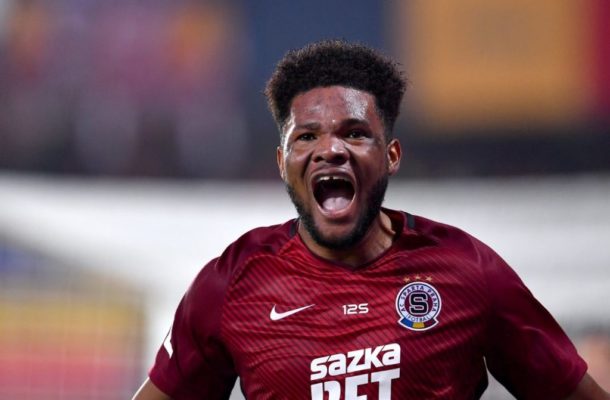 Sparta Prague head coach Václav Jílek has jumped to the defense of striker Benjamin Tetteh after a series of unimpressive displays by the Ghanaian youth international.

The 22-year old began life with the Czech First League side on a bright note, netting nine league goals in his maiden campaign which made him the subject of transfer speculation to some top flight clubs In England.

But since then, his productivity has shrunk significantly and team mate Libor Kozák has now become the first choice striker of Sparta Prague.

In their game against Příbram last weekend however, coach Václav Jílek made a change and gave the Ghanaian forward a chance to show up.

Benjamin Tetteh young created two goal scoring chances but failed to convert either of them.

The first chance was saved by the goalkeeper Ondřej Kočí and the second ended hitting the crossbar. That could have easily caused Sparta Prague but in the end they won the game by a single goal to nil.

And speaking after the game, Head coach Václav Jílek said the Ghanaian Youngster is still a young player.

“Benjamin is a young player. He is only 22 years old, so I don't expect him to be at his peak at that age," the coach said.

"In his case, it's all about hard work and attitude. I see that he is working on himself, adding himself after training, ” Václav Jílek added.

Tetteh joined Sparta Prague from Dreams FC a couple of years ago after impressing in the Ghanaian domestic league and Ghana Under 20 team.